Two days ago marked the 6th-month anniversary of this (my first) blog, and this is my 100th post. For the occasion, I'm posting my most recent acquisition - the 1st Maury Wills card from Topps. Yes, after 8 years, Wills finally got his "rookie" card. It's only taken me 43 years to get it!


Maury Wills (#570) was signed by the Brooklyn Dodgers, and played 7 seasons in their minor-league system before even advancing to triple-A (in 1958). After a year and a half in triple-A, Maury made his major-league debut on June 6, 1959. Don Zimmer had been the Dodgers' starting shortstop, but from July 4th on, Wills was making most of the starts there. (They each started 70 games at shortstop that season.) 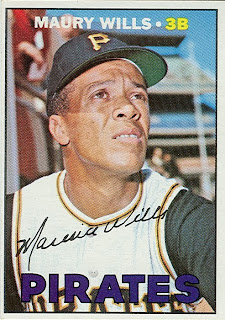 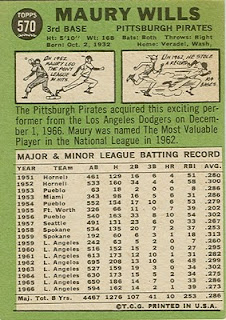 From 1960 to 1966, Wills started 140 or more games at shortstop for the Dodgers each season (except 1963). The Dodgers inexplicably started Dick Tracewski at shortstop for long stretches of games in 1963, while Wills was either starting at 3rd base or was out of the lineup. (Maybe an old-school Dodgers fan can shed some light on that?)

In 1962, Wills actually started 164 of the Dodgers' 165 regular-season games that year! That season, he set a record with 104 stolen bases, and won the MVP award. He also led the league in plate appearances, at-bats, and triples that season.

After the 1966 season, Wills was traded to the Pirates for third baseman Bob Bailey and minor-league shortstop Gene Michael. He played 3rd base during his 2 seasons in Pittsburgh.

Maury was selected by the Expos in the expansion draft following the 1968 season, and after starting 46 of the Expos' first 50 games at shortstop in 1969, he was traded to the Dodgers (with outfielder Manny Mota) for outfielder Ron Fairly and infielder Paul Popovich. The Dodgers, who had been getting by with Ted Sizemore and Billy Grabarkiewitz at shortstop, returned Wills to his familiar post. Maury started all but 6 games at short for the rest of the season.

Wills was the Dodgers' starting shortstop until April 28, 1972 when Bill Russell took over the position. Wills remained with the team for the rest of the season as a backup, and was released in late October.

Wills was featured on one of the 1960 topps world series cards though he was unnamed. I think he was a proponent of fleer so topps wouldn't or couldn't sign him.

Wills was featured on a Topps 1959 card