Here is relief pitcher Moe Drabowsky, fresh off his success in the 1966 World Series.

Drabowsky was signed by the the Cubs in 1956 as a bonus baby, and spent his first 4 seasons on the Cubs’ roster as a starting pitcher.

Although only appearing in 9 games in his first season, he pitched in 36, 22, and 31 games over the next 3 seasons, so he wasn’t the typical bonus baby who sat on the bench for his minimum required time and then went to the minors for some needed “seasoning”. Moe was 13-15 for the Cubs in 1957, and led the staff in starts, innings pitched, ERA, and strikeouts. 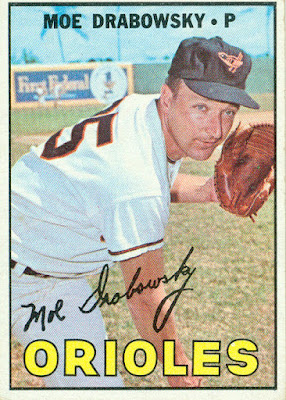 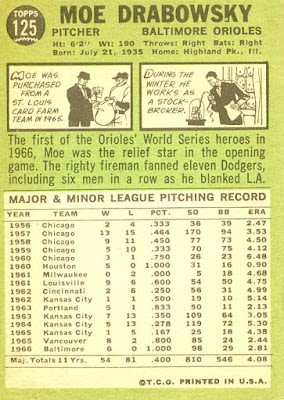 Drabowsky pitched most of the 1960 season out of the Cubs’ bullpen, but also found himself down with the Cubs’ AAA team in Houston for much of July.

The following pre-season he was traded to the Braves for shortstop Andre Rogers. Moe manned the Braves’ bullpen until mid-June 1961, when he was demoted to AAA for the 2nd consecutive season.

After the season, the Reds picked him up in the Rule 5 draft. After several months as a Reds’ starter in 1962 he was purchased by the Kansas City Athletics, and flipped back and forth from the rotation to the bullpen for the next 2+ seasons. He also spent part of the ’63 back in triple-A.

After making 5 starts at the beginning of the ’65 season, Moe was relegated to the bullpen until mid-June, then was sent to the minors for the remainder of the season. After the season he was purchased by the Cardinals, but a few weeks later was picked by the Orioles in the Rule 5 draft (his 2nd Rule 5 move).

Drabowsky (by this time strictly a reliever) pitched for the O’s for the next 3 seasons, and was the game 1 hero in the 1966 World Series. 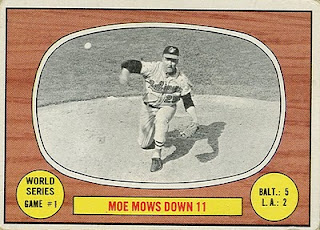 After the ’68 season, he was selected by the Kansas City Royals in the expansion draft (as was his O’s teammate Wally Bunker). While Bunker led the upstart Royals in wins (12) and innings pitched, Drabowsky led in saves (11) and also won 11 games. Moe began the 1970 season with the Royals, but returned to the Orioles via trade in June.

His 2nd stop in Baltimore was a short one, as he moved on to the Cardinals after the season. He pitched a season and a half for St. Louis, then was released in early August 1972. A week later the White Sox picked him up but released him in October, ending his 17-year career.

Forty-nine years ago this month, I started collecting baseball cards. (I think I began when the 2nd or 3rd series of 1967 cards were in the stores, so I had to get the earlier cards through trades and "shooting" cards.) Anyway, by the end of that season I had collected every card in the first 6 series except the Cardinals Team card.

The high-numbered 7th series wasn't sold in my area, so I didn't get any of them until visiting card stores and shows in the 1980s. In a year or so, I was able to get all but five of those high-numbers. Six years ago, I got the Maury Wills card, cutting my want list to four.

Today, I scored the hard-to-find Brooks Robinson card, at the same antique store where I picked up 100 or so 1965 cards last year, and also these Topps 1964 giant cards. 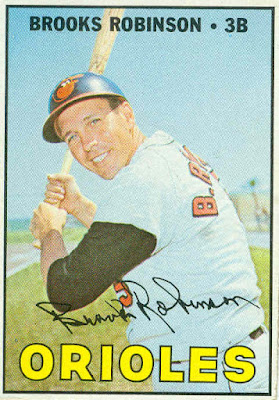 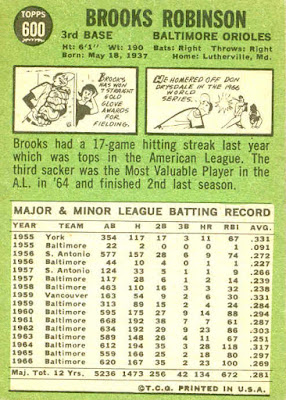 I have already posted my 1966 Brooks Robinson card here, so I won't re-hash his playing career. Just want to say "1 more down, 3 to go!"

While at that store, I also picked up these two Mickey Mantle cards, which I will feature on my '65 and '66 blogs at some point. These are 1996 reprints with Stadium Club-like cardstock, and are glossy on both sides. Even so, they will now take their place in my '65 and '66 binders, because there's little chance that I will get the originals. 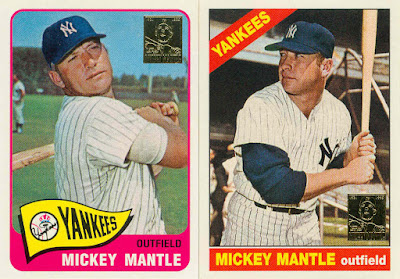 Posted by Jim from Downingtown at 6:37 PM No comments: