Here is another of the 13 multi-player cards that Topps included in their 1967 set - the Detroit Tigers' "Bengal Belters". (I always pictured Norm Cash as your typical burly, slugging 1st baseman, but here he looks smallish next to Al Kaline.)

Norm Cash was signed by the White Sox in 1955, and after appearing briefly with Chicago in '58 and '59 (including the 1959 World Series), he was traded to the Indians in a 7-player deal that included Minnie Minoso returning to the Sox. A week before the 1960 season started, Cash was flipped to the Tigers. 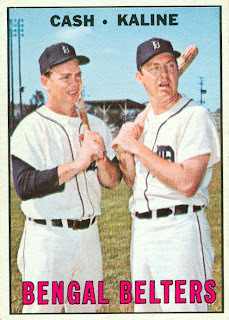 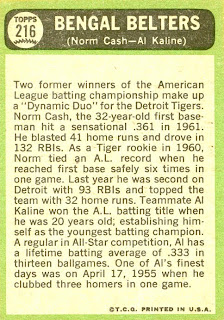 Al Kaline joined the Tigers as a bonus baby in 1953 at age 18, having never played in the minors. He appeared in 30 games that season (mostly as a pinch-hitter) then was a regular outfielder for the Tigers for the next 19 seasons (1954-72).

Posted by Jim from Downingtown at 3:06 PM No comments:

Today we check out Lew Krausse, pitcher for the Kansas City Athletics. This was the Athletics' last year in Kansas City, and Krausse was in the rare 7th series, so it's really the last look at a player in a KayCee uniform. (The other 7th series Athletics are rookie cards, and a capless Bob Duliba.) 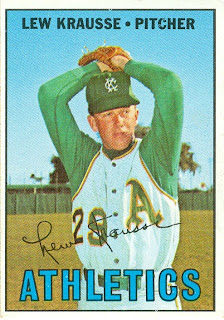 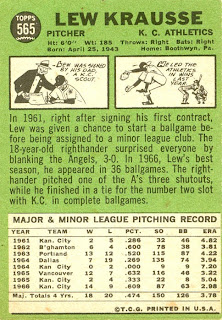 Krausse grew up in the Philadelphia suburbs (the topic for my next 1960s Baseball blog post), and went to Chester High School, as did long-time Pirates' manager Danny Murtaugh. (Lew's stomping grounds were the same as my dad's, although Krausse was 12 years younger, so they probably didn't cross paths.)

Krausse's dad (Lew Sr.) pitched for the Philadelphia Athletics in 1931-32.

Lew Jr. had been a star all through little league and high school baseball (pitching 18 no-hitters in high school), and was signed as a $125,000 bonus baby by the Athletics in 1961. He pitched a complete game shutout (vs the Angels) in his major-league debut in June, at age 18.

Lew became a full-time big-leaguer at the start of the 1966 season. In each of the next four years, he split his time between the starting rotation and the bullpen, but was always among the top four or five A's pitchers in innings pitched (along with Catfish Hunter, Chuck Dobson, Blue Moon Odom, and Jim Nash).

After the 1969 season, Krausse was traded to the Brewers (along with outfielder Mike Hershberger, catcher Phil Roof, and pitcher Ken Sanders) for 1st baseman Don Mincher and infielder Ron Clark.

After 2 seasons in Milwaukee, Lew was traded to the Red Sox (with pitcher Marty Pattin and outfielder Tommy Harper) for first baseman George Scott, pitchers Jim Lonborg and Ken Brett, catcher Don Pavletich, and outfielders Billy Conigliaro and Joe Lahoud. Lew pitched for the BoSox in 1972, but was released the following spring.

He was quickly re-signed by the Athletics, and spent most of the season in the minors, before signing with the Cardinals in September. Krausse spent the '74 and '75 seasons bouncing around in the minors with the Braves and Athletics.
Posted by Jim from Downingtown at 11:46 AM No comments: