Well, it's been eleven years (yesterday) since I started blogging here, with the 1967 set being my first blog. That set included 490 individual player cards, and for 11 years I have featured 486 of those players on one set blog or another. The 4 remaining are Bob Barton, Jim Beauchamp, Aurelio Monteagudo, and Carroll Sembera. 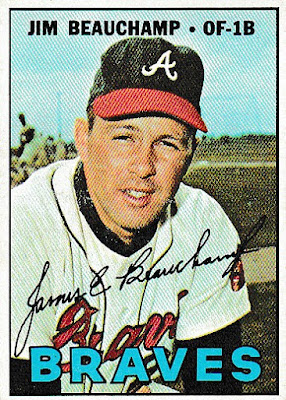 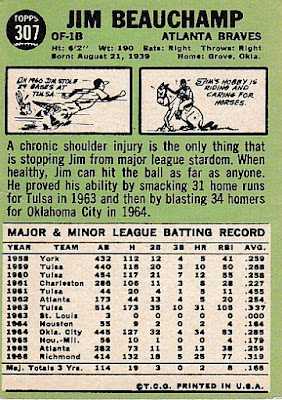 I’m not sure why Jim Beauchamp even has a card in this set. Since the Braves acquired him in May 1965, his major-league action consisted of 4 games in 1965, no games in 1966, and 4 games (all pinch-hitting appearances prior to May 6) in 1967. I guess somebody at Topps liked the Braves, which is why we see cards for Beauchamp, Tommie Aaron, and Dave Nicholson, despite little or no playing time.

After 3 seasons of non-use, he was traded to the Reds in October 1967 (with Mack Jones and Jay Ritchie) for Deron Johnson. Jim had more playing time with the Reds in ’68 and ’69 than he did since his days with the Colt .45s.

He returned to Houston in December 1969, but by the following June was traded to the Cardinals for pitcher George Culver.

In October 1971, Jim was part of an 8-player trade with the Mets.  After 2 seasons in New York, he was released during spring training 1974, and played that season with the Cardinals’ AAA team before retiring.

Posted by Jim from Downingtown at 7:00 AM No comments: