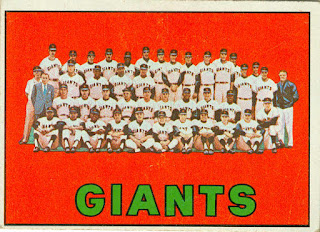 These are the Giants' top 4 starters (in order of games started and innings). Gaylord Perry started 37 of his 39 games, for 293 innings. He compiled a 15-17 record while striking out 230 batters. Mike McCormick was acquired before the season for pitcher Bob Priddy and outfielder Cap Peterson. All he did was lead the NL with 22 wins, and collected 150 strikeouts. Juan Marichal at #3? After pulling a hamstring on August 4th, Juan was done for the season (except for an unwise return on 8/25, when he reinjured himself). He finished at 14-10 in only 26 starts. Ray Sadecki went 12-6 in his first full season with the Giants, starting 24 of his 35 games.

Here are the bullpenners and spot starters (in order of games played). Frank Linzy is the only one of the top 6 to appear strictly in relief. He led the entire staff in games (57) and ERA (1.51), and collected 17 saves. Ron Herbel, Bob Bolin, and (to a lesser extent) Joe Gibbon were spot starters but primarily relievers. Lindy McDaniel appeared in 41 games, all but 3 in relief. 39-year-old lefty Bill Henry was the oldest player on the roster, beating Willie Mays by 3 years. He appeared in 28 games, but only for 21 innings. Ron Bryant and Rich Robertson each pitched 1 game in relief.

These are the Giants' starting eight. Tom Haller had been the regular catcher since 1962, and 1967 would be his last season with the Giants. Willie McCovey cracked 31 homers to go with his 91 RBI. Despite what the cards say, Tito Fuentes was the regular 2nd baseman (then spent all of '68 and most of '69 in the minors) while Hal Lanier held down the shortstop job.

Jim Ray Hart split his time between 3rd base and left field, and matched McCovey's power numbers (29 HR, 99 RBI). Jesus Alou split the left field chores evenly with Hart, and also started 43 games in right field. Willie Mays started his downhill slide in 1967. His home run total (22) dipped below 30 for the first time since 1960, although he was selected to the all-star team for the 14th consecutive season (and would play in 6 more). Ollie Brown was the primary right fielder.

Here are the bench players, in order of plate appearances. 10-year veteran Jim Davenport was the primary backup at 3B and SS. Switch-hitting Ken Henderson was the team's 5th outfielder (Hart was #4). Jack Hiatt was primarily the backup 1st baseman, although he also caught 3 games. Rookie Dick Dietz started 34 games (to Haller's 120) and would take over the job the following year.

Ty Cline was purchased from the Braves on May 31st, and served as a lefthanded pinch-hitter and 6th outfielder. Like Dietz, Bobby Etheridge would nab one of the Topps all-rookie spots. Unlike Dietz, his career would be short: 40 games in '67 and 56 games in '69. Dick Groat was purchased from the Phillies in late June, and appeared in 34 games for the Giants in the final season of his 14-year career. Veteran Norm Siebern was acquired in December 1966, played in 46 games (mostly as a pinch-hitter) and was shipped off to the Red Sox in July.

Two Giants' legends (although McCovey and Hart were the main power sources in 1967). Herman Franks managed the Giants from 1965 to 1968, then returned with the Cubs from 1977-79. Bob Priddy spent the entire season with the Senators, while Ozzie Virgil was in the minors for all of 1967 and 1968.

Topps has Dietz as an outfielder on this card. He was primarily a catcher in the minors (1961-62, 65-66), but played outfield for 2 seasons to make room for Randy Hundley (1963) and Bob Barton (1964). He didn't play outfield in the majors. Bill Sorrell was selected from the Phillies in the November 1966 Rule 5 draft, played in 18 games, and was returned to the Phillies in June.

12/13/66 - Traded outfielder Cap Peterson and Bob Priddy to the Senators for Mike McCormick.

12/14/66 - Traded outfielder Len Gabrielson to the Angels for Norm Siebern.


Next team review: Boston Red Sox
.
Posted by Jim from Downingtown at 7:21 PM No comments: 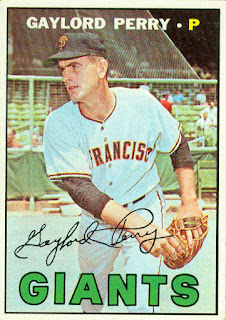 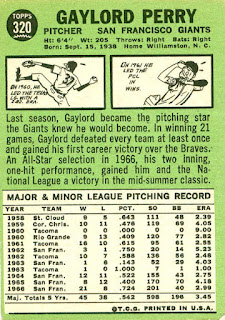 Before the 1978 season, Gaylord was traded to the Padres. His first season in San Diego was a carbon copy of his first in Cleveland: He led the league in wins (21) and won the Cy Young award. Perry pitched one more season in San Diego before spending the last 4 seasons of his career bouncing from team to team.
Posted by Jim from Downingtown at 10:04 PM 1 comment: