This is Tito Fuentes’ first solo card. In 1967 he was the Giants’ 2nd baseman, not shortstop. (Hal Lanier’s position is similarly incorrect on his card.) I recall Fuentes as having an extremely closed batting stance.

Fuentes was signed by the Giants in 1962 and played 3 seasons in the minors as a 2nd baseman. In 1965 he switched to shortstop, playing 90 games in triple-A before making his major-league debut in August.

Tito was the team’s primary shortstop in 1966, starting 74 games there (including every game after July 21st). He also started 52 games at 2nd base, as he and Lanier flip-flopped between the 2 positions for the first half of the season. Fuentes finished 3rd in the NL Rookie of the Year voting, behind Tommy Helms and Sonny Jackson. 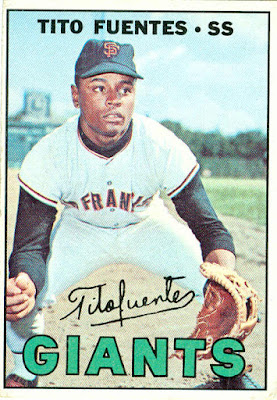 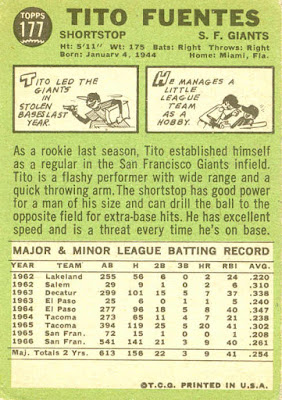 Tito returned to the Giants in late-May 1969, but didn’t draw any starting assignments until early-July. With Ron Hunt now firmly entrenched at 2nd base, Fuentes' few-dozen starts all came at 3rd base and shortstop.

Fuentes split the 2nd base starting assignments with Hunt in 1970, while also spending a good deal of time at SS and 3B.

After the 1974 season he was traded to the Padres for shortstop Derrel Thomas. He played 2 seasons with San Diego, then was granted free agency.

Tito signed on with the Tigers for 1977, and was their starting 2nd baseman for 1 season – the last before Lou Whitaker’s long tenure.

The Expos acquired him from the Tigers in January 1978, but released him during spring training. Tito was idle until mid-season, when he was picked up by the Athletics in late-June. After playing 13 games, he was released in late-July.

Fuentes played briefly in the Inter-American league in 1979.
Posted by Jim from Downingtown at 10:22 AM 5 comments: