Dick Selma had a 10-year career (9+, if you factor in his 1st season was just a few games in a September call-up). He was primarily a reliever, but started quite a few games for the Mets in 1968 and the Cubs in 1969.

Selma was signed by the Mets in May 1963, and played 3 seasons in the minors before making his major-league debut in September 1965. In both 1966 and 1967, he split his time between the Mets and their AAA team.

In 1968 he started 23 of his 33 games, and was the team's #4 starter behind Tom Seaver, Jerry Koosman, and the veteran Don Cardwell. 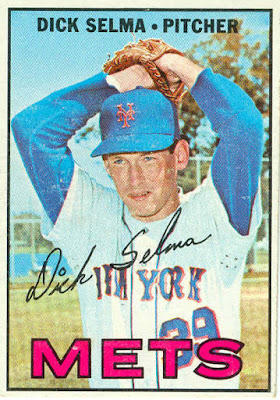 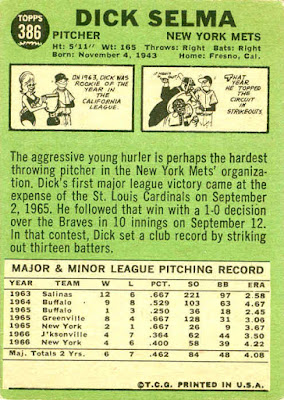 With Nolan Ryan, Gary Gentry, and Jim McAndrew around to fill starting slots, Selma was left unprotected in the expansion draft, and was selected by the Padres with the 5th pick.

He was their Opening-Day starter in 1969, but by late-April was traded to the Cubs for pitchers Joe Niekro and Gary Ross. Dick posted a 10-8 record as the Cubs' #4 starter in his only season there. (The 1969 Cubs had a tight starting rotation. Only 4 pitchers started more than 5 games!)

After the 1969 season, Selma was shipped off to the Phillies (along with outfield prospect Oscar Gamble) for outfielder Johnny Callison. Dick played for the Phillies for 4 seasons.

Selma began the 1973 season with the Philllies, but was released in early May. Two weeks later he was signed by the Cardinals and assigned to their AAA team. He was sold to the Angels in the season's final week but did not see any action.

Dick pitched 18 games for the Angels by mid-June 1974, then was sent to the minors. He was sold to the Brewers in late-July, but after a 2-game stint in August left him with a 19.29 ERA, the Brew Crew said "no thanks" and returned him to the Angels.

He also pitched for the Dodgers' triple-A Albuquerque team in 1975-76 before retiring.