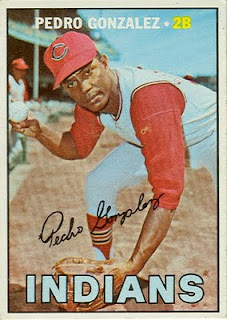 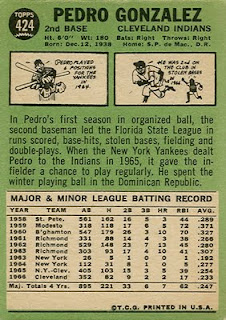 Pedro's last major-league game was on September 27, 1967. He spent the next 4 seasons playing in the minors for the Indians, Cardinals, and Pirates.
Posted by Jim from Downingtown at 9:27 PM No comments:

This (#568) is the last of John Sullivan's three Topps baseball cards. He first appeared on a Tigers Rookies card in 1965. In 1966, his card portrayed him as a Tigers' catcher. This year, he moves on to the Mets. Coincidently, all three of John's cards were in the rare 7th series (a/k/a high numbers). In my neighborhood, the 7th series was not sold in stores, so my first knowledge of Sullivan was when the Phillies signed him as their 3rd-string catcher during the 1968 season.

Sullivan was primarily a minor-league catcher, logging 1201 games over 13 seasons in the bush leagues, while playing only 116 big-league games over parts of 5 seasons. John was signed by the Tigers in 1959, and moved up their farm system ladder from 1959 to 1965. After a cup of coffee in both 1963 and 1964, he played in 34 games for Detroit in 1965, although spending part of the season at triple-A Syracuse. 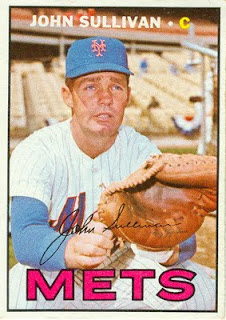 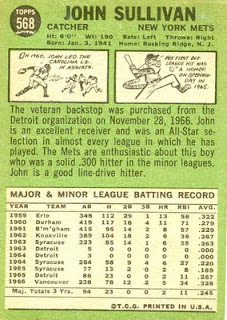 1966 is a mystery. The record shows he played the entire season with the Athletics' triple-A team in Vancouver, although still Tigers' property, because after the 1966 season the Mets selected him from the Tigers in the Rule 5 draft.

1967 was the high point of Sullivan's career. Not only was it the only season where he managed to stay out of the minor leagues, but he worked his way up to SECOND string catcher, behind Jerry Grote. (Although Topps printed a card for John Stephenson as a Mets' catcher, Stephenson played only for the Cubs in 1967.) Sullivan played in 65 games in '67, the most of any season.

In February 1968, the Phillies purchased his contract and stashed him at triple-A San Diego. Although playing most of the season in the minors, he did get into 12 games with the Philadelphia. (I guess since the Phillies already had Mike Ryan on board, they didn't need another Irish catcher!) His final major-league game was on August 7th.

During spring training 1969, the Phillies swapped him to the Orioles for another backup catcher - Vic Roznovsky. Sullivan would kick around the minors for 4 more seasons, with the Orioles (1969) and the Royals (1970-72).
Posted by Jim from Downingtown at 11:36 PM No comments: