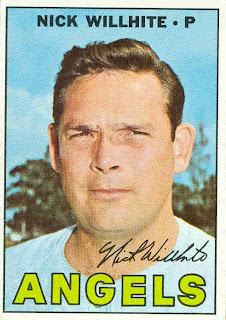 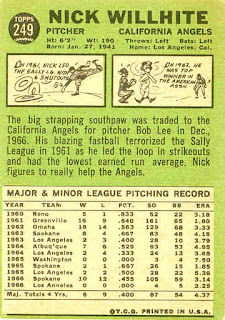 Willhite made his major-league debut with the Dodgers on June 16, 1963. During his first stint with LA (1963-64) he was a starting pitcher, but was #6 on the depth chart for both seasons.

After the 1964 season, he was purchased by the Senators, who sold him back to the Dodgers in mid-May the following season. Besides playing for both teams in '65, he also spent some time with the Dodgers' AAA team in Spokane, Washington. Willhite played most of the 1966 season in the minors, and a few games with the Dodgers.

After the 1966 season, Nick was traded to the Angels for reliever Bob Lee (a steal for the Dodgers, considering that Lee was the ace of the Angels' bullpen that season, and Willhite was pretty much minor-league filler for the Dodgers). Nick appeared in 10 games (7 starts) for the Angels in 1967 before he was sent over to the Mets on June 10th for pitcher Jack Hamilton.

Willhite's stay in New York only lasted about 5 weeks. After 4 appearances (his last on June 23rd), he spent the rest of the season with the Tulsa Oilers (the Cardinals' AAA team). The 1968-70 seasons saw him bouncing around the minor-league organizations of the Mets, Cubs, Twins, and Royals.
Posted by Jim from Downingtown at 5:17 PM No comments: 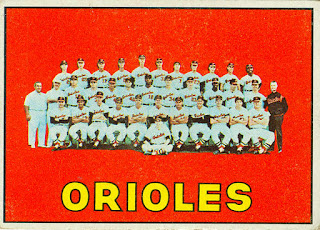 Program Note: I recently acquired the 1969 Topps Blog from its previous owner. Be sure to check it out, and add it to your sidebars. (You may also want to add my 1963 and 1970 blogs to your sidebars, if you haven't already done so.)


This is the final card for Cubs' utility infielder Ron Campbell (#497). It also happens to be his rookie card. Ron is one of several in the 1967 set whose career ended before the 1967 season. I wonder if anyone else had their rookie card issued after their major-league career was over? 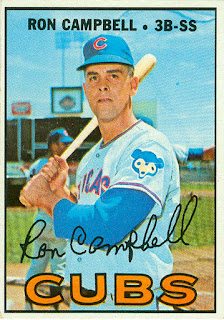 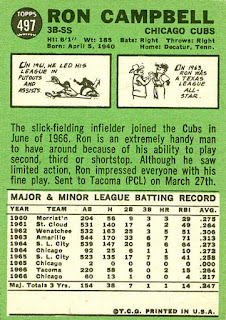 Ron was signed by the Cubs in 1960, and played 11 seasons (1960-70) in the minors, mostly with the Cubs' organization, but his last 2 seasons in the Pirates' system. In the minors, Campbell played 3rd base about 85% of the time, but also saw action at 2nd base and shortstop.

He made his major-league debut on September 1, 1964, and played about 2 dozen games with the Cubs in each of 1964 and 1966, and only 2 games in 1965. Probably the arrival of rookie infielder Paul Popovich in 1967 made Campbell's presence unnecessary on the major-league roster. Of course, with Ron Santo, Don Kessinger, and Glenn Beckert as the starters, extra infielders by any name weren't really necessary!

Check out Wrigley Wax's post on Ron Campbell.
Posted by Jim from Downingtown at 5:28 PM 2 comments:

Here is the 2nd and final card for Larry Elliot (#23), who previously appeared on the 1964 Mets Rookies card. Elliot is one of a dozen players in the 1967 set who didn't play in the majors after 1966.

Larry was signed by the Pirates in 1958, and spent 6 seasons in their farm system, with only a handful of major-leagues appearances in 1962 and 1963. After the 1963 season, the Mets purchased his contract, and he split the 1964 season between triple-A and the Mets. In New York, he started 59 games in a center field platoon with Jim Hickman.

Elliot spent the entire 1965 season on loan to the Reds' triple-A team in San Diego, before returning to the Mets in 1966. This time around he was relegated to 4th-outfielder status, behind (among others) rookie Cleon Jones and 2nd-year man Ron Swoboda. 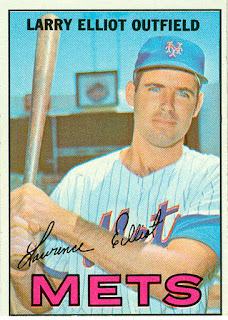 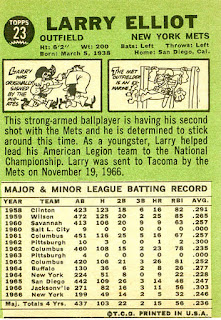 Larry's final major-league appearance was on October 2, 1966. In early May 1967, he was traded to the Kansas City Athletics for 3rd baseman Ed Charles. He spent the 1967-69 seasons playing in triple-A for the Mets, Athletics, Angels, and Twins, before retiring.
Posted by Jim from Downingtown at 11:38 PM No comments: