Stan Bahnsen was signed by the Yankees in 1965, and played 3 seasons in the minors (plus a 4-game call-up to New York in 1966) before joining the Yankees permanently in 1968, when he compiled a 17-12 record and won the American League Rookie of the Year award. That was good enough for Topps to name him to the All-rookie team. 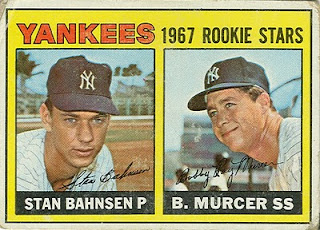 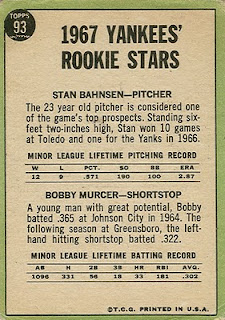 Bobby Murcer..... After blowing through so many "next Mickey Mantles" (Roger Repoz, Steve Whitaker, Bill Robinson, etc), Murcer was the closest thing to a next Mickey Mantle during the late 1960s/early 1970s for the Yankees.

Like Mantle, Murcer was from Oklahoma, played shortstop in the minors, and became a star center fielder with the Yankees. He was signed by the Yankees in 1964, and played 3 seasons in the minors (with brief call-ups in 1965 and 1966).

After missing the 1967 and 1968 seasons while in the Army, Murcer returned to the Yankees as their opening-day 3rd baseman in 1969. After a month as the regular 3rd baseman, Bobby moved to right field, where he started most games until the end of August. For the final month of the season, he took over as the starting center fielder. He remained at that legendary position until May 28, 1974, when he moved over to right field for the remainder of the season (to make room for Elliott Maddox).