Jimmie Coker was a backup catcher who hung around for parts of 9 seasons. He was signed by the Phillies in 1955, and except for 2 games in September 1958, he toiled in the Phillies' farm system until the start of the 1960 season.

After using Carl Sawatski, Valmy Thomas, Joe Lonnett, and Jim Hegan (all in their 30s) at catcher in 1959, the Phillies cleared the decks in 1960 and went with rookies Jimmie Coker and Clay Dalrymple, along with veteran Cal Neeman (who was acquired from the Cubs with Tony Taylor). Coker started about half the games, and made the Topps all-rookie team, despite his .214 batting average. 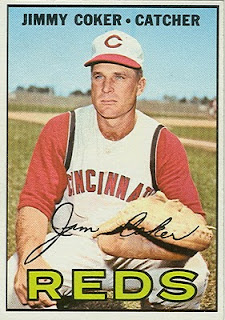 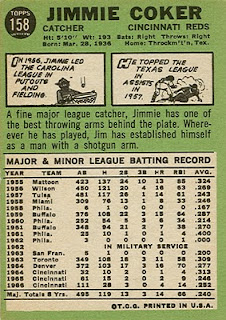 In 1961, reality set in for Coker. Dalrymple was the opening-day starter and started 107 games. Coker spent most of the season at triple-A Buffalo, while making only 11 appearances with Philadelphia.

The good news in 1962 is that Jimmie wasn't in the minor leagues. The bad news is he only played 5 games for the Phillies, losing the remainder of the season to military service. In November he was sold to the Orioles, but before he could get comfortable, he was traded to the Giants a month later (along with pitchers Jack Fisher and Billy Hoeft) for pitchers Mike McCormick and Stu Miller, and catcher John Orsino.

After spending the 1963 season in the minors, the Giants traded him to the Cardinals on October 1st. A week before the 1964 season started, he and Gary Kolb were traded to the Braves for catcher Bob Uecker. (Wow, Ueck commanded TWO catchers in return!)

Coker spent the 1964 season in the minors, until late August, when he was sold to the Reds, and appeared in 11 games down the stretch.

Coker spent his final 3 seasons (1965-67) with the Reds fulltime, as their 3rd-string catcher. He played sparingly in 1965, but saw much more action in 1966 and 1967. In those last 2 seasons, he had more playing time than any season since his rookie year.

Jimmie made his last career start on August 26th, 1967. Two days later, Johnny Bench made his major-league debut, and it was goodnight Coker!
Posted by Jim from Downingtown at 11:23 PM