All Good Things Come to an End 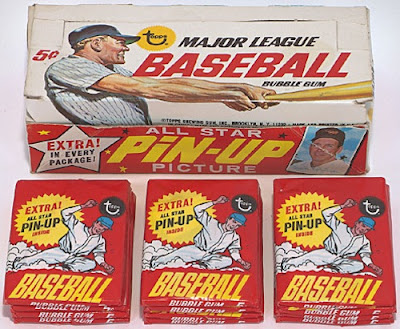 I remember these boxes vividly. (The pack wrappers, not so much. We threw them out as soon as they were opened.) This particular box includes a reference to the pin-ups that were inserted into packs in some (but not all) series.

1967 was the first year I collected baseball (and football) cards.  Prior to that, my brother and I collected non-sports issues like Batman, Beatles, Green Berets, McHale's Navy, Munsters, and especially War Bulletin and Combat cards.

1967 was also the first year I followed Major League baseball. I had played youth baseball for a summer or two before that, but it never occurred to me to collect cards or watch/attend pro games until '67.

As is the case with most collectors I would guess, my first set is also my favorite set.  Although I didn't start collecting until (I think) May, through trading with friends I was able to get all the cards that were issued in March and April, but were no longer in stores.  By the end of the summer I had all but the infamous high numbers.

When I discovered card shops and shows at the malls in the 1980s, I was able to get most of the high numbers (at an exorbitant $1 each!!!).  By the time I started this blog I had all but 5 cards, then snared Maury Wills and Brooks Robinson a few years ago, and Tommy John earlier this month.

The Seaver and Carew rookie cards?  They will most likely remain as my Holy Grail.

If you haven't seen it already, please scroll down to the end of the sidebar to read comments about the set that I wrote, and posted on Zistle some years ago.
Posted by Jim from Downingtown at 8:00 AM

Congrats on finishing and that high number. It's a source of pride. I don't count my own views (their is a button for that I believe) but I like to see the daily and total count which is nearing 250K which may be reached a year from now.

Thanks! I just saw your pending comment tonight. I had also set my blogs to not count my own views, but I think it may revert to counting all whenever I clear my cookies.