I'd like to wrap up today's posts with the first installment of what I call "Classic Crew Cuts". Topps gave recently-traded players either the hats-off treatment, or the dreaded airbrush! Looking through the 1967 card set, there's about 20 players sporting the old-school look. These 3 are probably the tops (extra points for flatness and square corners!)

Long-time Phillie Curt Simmons (#39) leads off the parade. (I think he wins the contest for most surface area!) This is Curt's last baseball card, as he closed out a fine career in 1967 with the Cubs and Angels, one year after his contemporary Robin Roberts ended his MLB career (although Roberts pitched for the AA Reading Phillies in 1967). Curt is one of only 3 players with 1967 cards to have his MLB debut in the 1940s (along with Smoky Burgess and Joe Nuxhall). 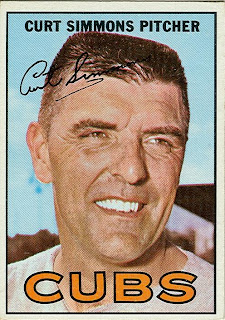 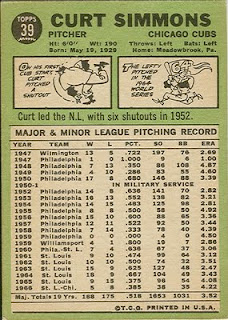 Next up is Danny Cater (#157) , also an ex-Phillie. After spending 6 years in the Phillies' minor league system, followed by 1 year in Philadelphia, Cater was traded to the White Sox. Here we see him in his Sox jersey, with just enough overhead clearance for his name. 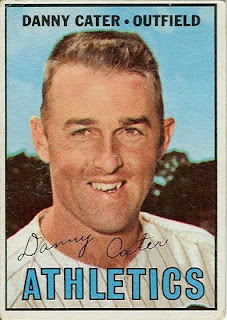 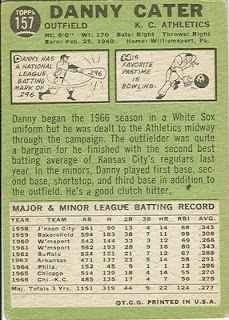 Contestant number three is Eddie Fisher (#434) (no, not that Eddie Fisher!). Eddie looks like he also just escaped from the Chicago White Sox. He lucked out, and went to the world champion Orioles, whereas Cater went to "the Yankees farm team" in Kansas City. 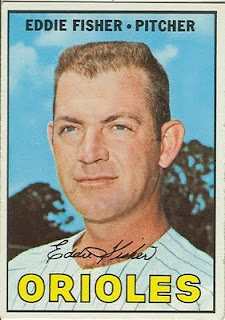 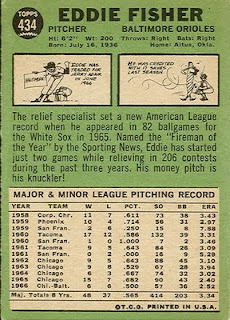 Of course, no discussion on crew cuts is complete without the king:

Posted by Jim from Downingtown at 11:12 PM No comments:

Back in 1967, as my brother and I were busting open packs of cards, anytime we found a player designated as "INFIELD" (or worse yet, "INF-OF"), we immediately sized him up as a stiff. There appears to be one exception: 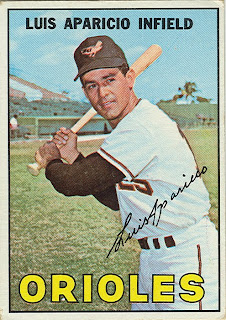 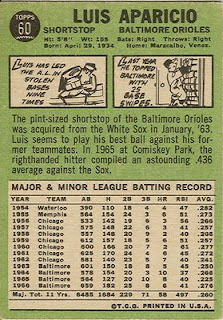 Here, Topps' use of "INFIELD" doesn’t make any sense, since Aparicio was a perennial all-star shortstop with the Orioles (and White Sox). To add to the confusion, the back of his card stated his position as ‘Shortstop’. (The same situation occurs on Ron Hansen’s card, but he wasn’t at the same level as Aparicio.)

I wonder if Luis' teammates ribbed him for being a "utility infielder"?
Posted by Jim from Downingtown at 9:52 PM 2 comments:

In the first series, Topps issued a Detroit Tigers rookies card #72. This appears to include pitcher George Korince and infielder John “Tom” Matchick. However, this card has another player incorrectly pictured as George Korince. 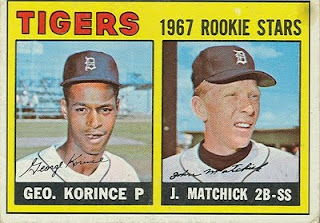 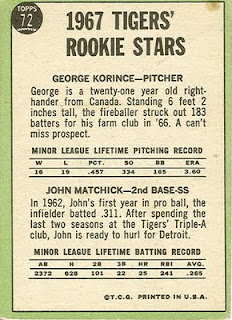 For the second Tigers rookie card (#526), Topps chose to correct this error by using one half of the card to correctly picture George Korince, with an explanation on the back. 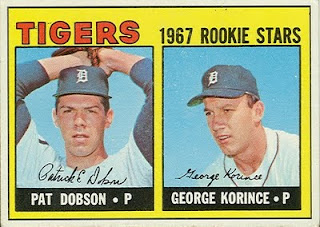 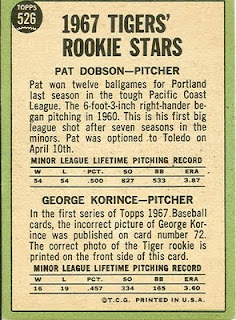 I’ve had 3 questions about this decision to "waste" a slot on this correction:

1. Was the Tigers farm system so bereft of prospects that they had nobody else to feature on this 2nd card?

3. Why did Topps make sure to correct this error, but in the previous year, they didn’t bother to correct the Dick Ellsworth card, which actually showed a photo of the late Ken Hubbs – Ellsworth’s teammate who died TWO YEARS EARLIER!


Guess who's on the 1968 Tigers Rookie Stars card?

Posted by Jim from Downingtown at 8:41 PM 4 comments: 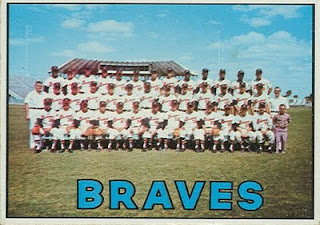 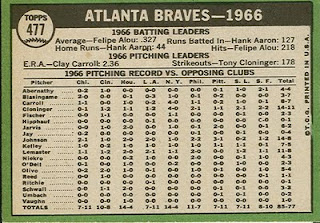 What’s up with this card? Eighteen other team cards feature the team superimposed on a yellow or red background (or, in the case of the Phillies, a blue background, since the yellow team name and their red caps precluded using the two primary background colors).

Here we have the team gathered on the baseball field. I wonder what caused Topps to depart from their standard background used for every team card since 1959?
Posted by Jim from Downingtown at 1:13 AM No comments:

Before posting some cards from the 1967 set, let's see who wasn't in the set (i.e., my scanner is broken today!)


The 1966 Topps baseball set was the last time a regular card was produced for more than two dozen long-time players. Besides the obviously notable Sandy Koufax, others who were left out of the 1967 set (due to retirement or permanent loss of major-league status) include:

Some of these guys bounced back in 1967 (and appeared on 1968 cards). Others had to wait until expansion.
Posted by Jim from Downingtown at 8:49 PM No comments:

Welcome to my blog!

The 1967 Topps cards were my starting point for baseball card collecting (back in the day). In my opinion, this is the best looking series issued by Topps. I have long been intrigued by various quirks within the set. I'll begin with some of these, and who knows, maybe someday I'll have all 609 cards posted here!
Posted by Jim from Downingtown at 8:33 PM No comments: