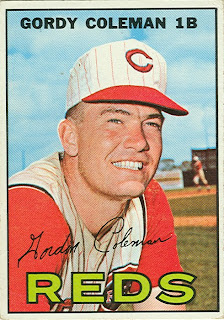 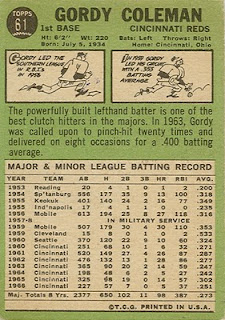 The death knell for Coleman's career was the arrival of rookie first baseman Lee May in 1967. Perez moved over to third base, but Johnson and May each started about 70 games at 1st base. Coleman only played 4 games with the Reds that season (the last on May 3rd), then was sent to the minors where he played 30+ games each for two triple-A teams: Buffalo (Reds) and Spokane (Dodgers).
Posted by Jim from Downingtown at 9:32 AM

Gordy Coleman supervised the trampoline at the Cincinnati Williams YMCA in the late 60's and was inspiring.