Today we look at the rookie stars cards - all in one place. Why did Topps only have 1 card for some teams, and as many as 3 for others? Topps made some major omissions, but some 1-card teams were probably bereft of minor-league talent. (And with the low bar set by some of the so-called "stars" that appear on these cards, that's really embarrassing for those 1-rookie-card teams.)
In team-name order (NL first): 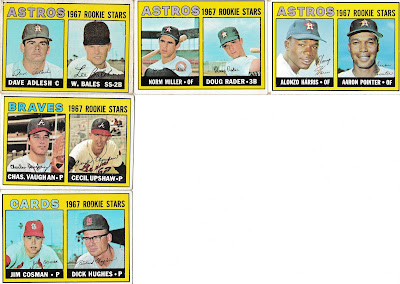 Astros: Norm Miller and especially Doug Rader were contributors for the next few seasons.  The others? Not so much.
Braves: Cecil Upshaw became the team's closer after Phil Niekro moved to the rotation at mid-season.  Ramon Hernandez is on an NL Rookies card further below.
Cardinals:  Only 1 card?  The eventual World Champs had a set lineup, with only Dick Hughes and Ron Willis (on an NL Rookies card below) able to make the roster. 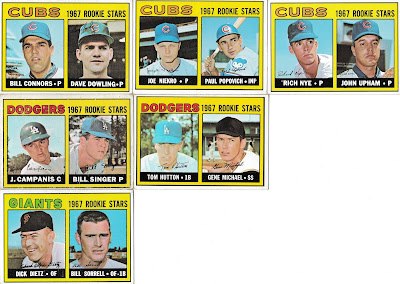 Cubs: The Cubs had SEVEN players appear on rookie stars cards (including Norm Gigon on an NL Rookies card), but none named Bill Stoneman or Chuck Hartenstein.  Huh?
Dodgers: Bill Singer also appeared on a '66 Rookies card with Don Sutton.  In 1967 he filled Sandy Koufax' vacancy in the rotation. Jim Campanis was the GM's son, so...
Giants: Only 1 card?  It's probably too soon for Bobby Bonds, but Bob Schroeder played 60 games in 1967, and there was the short-term phenom Bobby Etheridge. BTW, Dietz was a catcher. 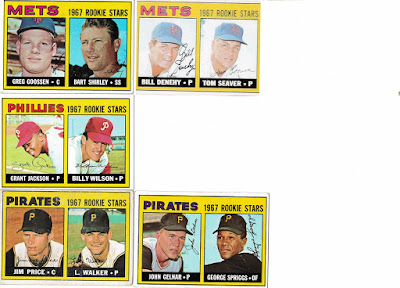 Mets: Greg Goossen, Bart Shirley, and Bill Denehy were lunch-pailers, but Topps redeemed itself with Tom Seaver's inclusion.  Don Shaw also appeared on an NL Rookies card.
Phillies: As much as the 1967 me wanted to see more Phillies' Rookies cards, objectively speaking, one was enough.  Grant Jackson and Gary Sutherland (on an NL Rookies card) were the only rookies to make the team.
Pirates: A whole lot of non-stars here.  Jim Price was dealt to the Tigers just before Opening Day, while Luke Walker eventually made the team (after 2 or 3 Rookie Stars cards). Jim Shellenback was on an NL Rookies card later. 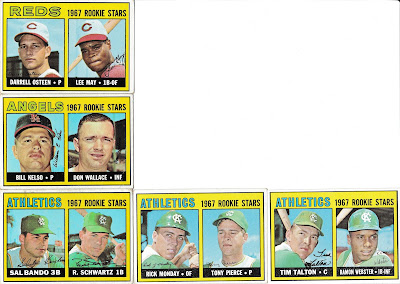 Reds: Where's Gary Nolan and Johnny Bench? Nolan was a 14-game winner in 1967, with over 200 strikeouts. (In fairness to Topps, he spent 1966 in low-A ball, so who would have known?)  Darrell Osteen and Lee May were also together on a 1966 Reds Rookies card.
Angels: Topps! The Angels had some rookie pitchers named Clyde Wright, Rickey Clark, Tom Burgmeier, Andy Messersmith, and Marty Pattin.  Wake up!
Athletics: Six rookies, but none named Reggie Jackson.  Randy Schwartz? Tim Talton?  Topps, please! 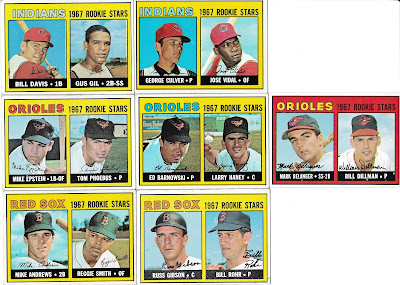 Indians: Bill Davis?  Again?  Where's Vern Fuller?
Orioles: Topps scored big on the first card with Mike Epstein (although for the Senators) and Tom Phoebus. Why the red frame on the 3rd card?  Sure, the "ORIOLES" name was usually in yellow, but Topps adjusted earlier for the Phillies and the O's first rookie card. Maybe Inspector 12 was on vacation that day.
Red Sox: Topps hit a home run with the Andrews/Smith pairing, both key starters for the AL Champs. 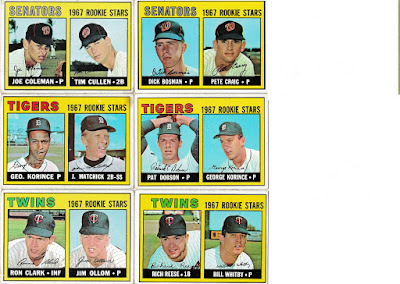 Senators: Joe Coleman and Dick Bosman were good starting pitchers over the next few seasons.
Tigers: The Tigers had 2 guys named George Korince?  LOL
Twins: Rich Reese was the team's 1st baseman for a few seasons.  Jim Ollom was one of 6 Jims on the Twins' 10-man 1967 staff. Where's Rod Carew?  He's on an AL Rookies card in the 7th series.  (I'm convinced Topps saved those 7th-series NL/AL Rookies cards for last-minute additions to the set.  If true, how was Carew an afterthought?) 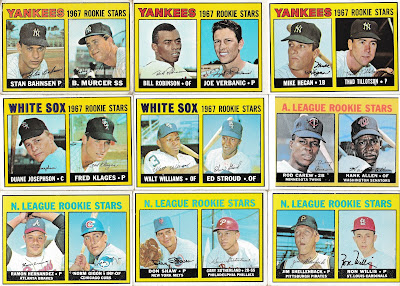 Yankees: Bobby Murcer appears here, although missing the '67 and '68 seasons while in the Army.  Stan Bahnsen reappeared on a '68 Yankees Rookies card, and was the AL Rookie of the Year in '68.
White Sox: Duane Josephson and Walt Williams became regulars in their rookie season.  Ed Stroud was dealt to the Senators early-on.
AL: Carew's rookie card is one of three cards I need to complete the set.  (Also the Seaver rookie, and Tommy John.)
NL: Shaw and Sutherland had the longest careers of these six.  Willis played for World Series teams in his first 2 seasons, but fizzled out soon after.
Other players having their rookie (solo) card in the 1967 set include Chris Short and Maury Wills (both 8-year veterans), Ken Holtzman, Jay Johnstone, Rick Wise, and for some reason known only to the braintrust at Topps, Bruce Brubaker.
Posted by Jim from Downingtown at 1:43 AM