Ralph Houk was the man who replaced the legendary Casey Stengel as the Yankees' manager in 1961.

He was an Army Ranger, rising to the rank of Major (also his nickname while in baseball). Houk fought in the Battle of the Bulge, and was awarded the Bronze Star, the Silver Star, and the Purple Heart.

He returned to the minors for the 1946 season, then spent the 1947 season as the 3rd string catcher behind Aaron Robinson and Yogi Berra. (Although Houk and Berra were both rookies, at age 27 Houk was 5 years older than Yogi, having missed 4 seasons.) 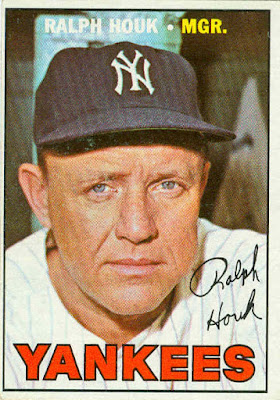 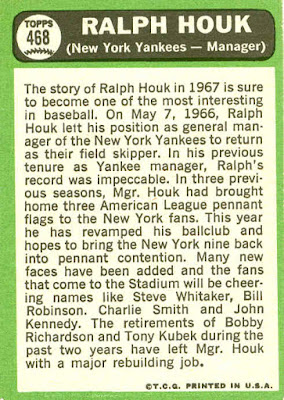 Ralph shuttled between the Yankees’ AAA team in Kansas City for the ’48 and ’49 seasons (spending most of that time in the minors), then was the Yankees’ 3rd-string catcher (behind Berra and Charlie Silvera) for all of 1950-53. His final season with the Yanks was 1954, where he was limited to 1 pinch-hitting appearance in May, but was also the team’s bullpen coach.

Houk assumed the Yankees’ helm for the 1961 season. The team responded with 3 consecutive AL pennants (as was the Yankees’ custom back then), and winning the World Series in his first 2 years.

After the 1963 season, Houk was kicked upstairs to the GM role, with Berra taking over as manager. The Yankees went to the World Series in ’64 but lost, costing Berra his job after only 1 season. Next up was Johnny Keane, who lasted only 1 month into his 2nd year, whereby Houk returned to the manager’s chair on May 7th, 1966 with the team at 4-16.

After his managing days were over, he worked in the Twins’ front office from 1987-89.

After more than 5 years and 750+ posts on my various blogs, there are still about a dozen all-star caliber players I have not featured yet. Willie Davis is one of those.

This is one of my poorer-conditioned ’67 cards. I remember that many of my early-series cards that year were won in a variety of “flipping” games, so the corners are not very sharp. I have replaced many of these over the past 20 years, and Davis is certainly a candidate for an upgrade. 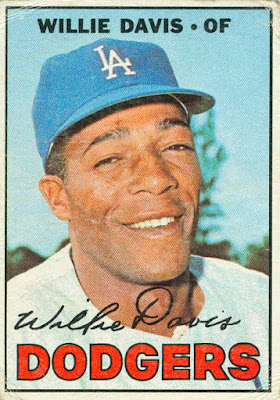 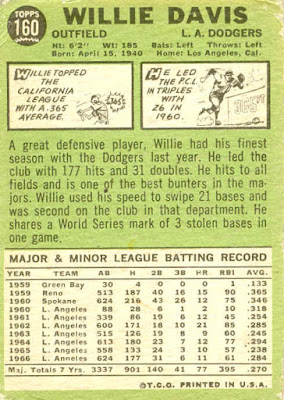 Willie Davis was signed by the Dodgers in 1958, and made his major-league debut in September 1960. He started 21 of the last 22 games in center field, taking over the position from Tommy Davis (no relation).

Willie was the team’s everyday center fielder from 1962 through the 1973 season. During that time, he led the NL in triples twice (’62, ’70), made 2 All-Star teams (’71, ’73), and won a Gold Glove in 1972. Aside from catcher John Roseboro, Willie was the only other Dodgers’ regular that didn’t move around the field to a variety of positions.

After the 1973 season, Davis was traded to the Expos for pitcher Mike Marshall. He was only north-of-the-border for one season, moving on to Texas after 1974 for pitcher Don Stanhouse and infielder (and current Phillies’ manager) Pete Mackanin.

Davis was flipped to the Cardinals in June 1975, and moved on to the Padres after the season. San Diego released him after the 1976 season, and Willie played in Japan for the ’77 and ’78 seasons. [Wow – before today I thought he only ever played for the Dodgers!]

Davis hooked on with the Angels during spring training in 1979, and played in 43 games (mostly as a pinch-hitter) that season. He wrapped up his career playing in Mexico in 1980.