Here's relief pitcher Darold Knowles, sporting the windbreaker UNDER uniform look. Knowles was the ace of the Phillies' bullpen as a rookie in 1966.

Darold was signed by the Orioles in 1961, and pitched 5 seasons in their minor-league system. Early on, he was primarily a starting pitcher, but in '64 and '65, about half his appearances were out of the bullpen. He made his major-league debut in April 1965, but only pitched 5 games for the O's that year. 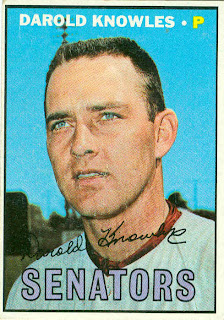 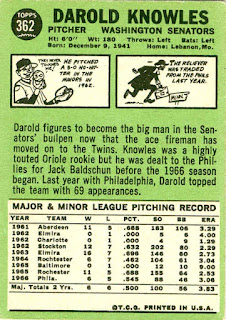 After the season, he was traded to the Phillies (along with veteran outfielder Jackie Brandt) for Jack Baldschun, who had been the Phillies' closer from 1962-65.  Knowles soon worked his way up to the top of the Phillies' bullpen, appearing in 69 games (the most of any Phils pitcher, and 33 more than any other reliever) and collecting 13 saves (9 more than the next guy). Darold came along at the right time, since the heir-apparent to Baldschun's fireman role (Gary Wagner) had a disastrous 1966 season.

He was one-and-done in Philly, getting shipped off to the Senators for center fielder Don Lock. Knowles spent 4-plus seasons in Washington's bullpen before a May 1971 trade hooked him up with the contending Oakland Athletics.

Although generally the team's top reliever during his stay in DC, with Oakland Knowles pitched in the shadow of Rollie Fingers. Darold pitched in the 1971 ALCS vs. Baltimore, and the 1973 World Series vs. the Mets.

Knowles was traded again after the 1974 season, and pitched 5 more full seasons for the Cubs, Rangers, Expos, and Cardinals. His last game was on April 18, 1980 - fifteen years to the day after his major-league debut.
Posted by Jim from Downingtown at 11:07 PM 2 comments: 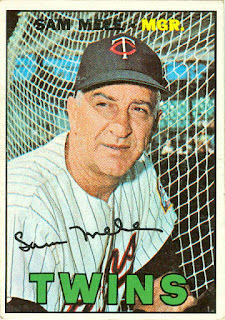 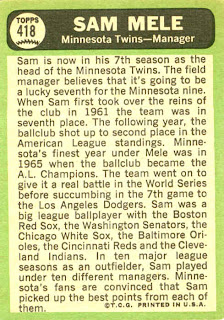 
Well team, that's it for the "Final card" series: 77 players and 3 managers. If you missed any, you can browse through the "final card" label below (or wait for an upcoming re-cap of all 80 cards).
Posted by Jim from Downingtown at 11:47 PM 1 comment:

Miller was signed by the Orioles in 1961, and pitched in the minors for 4 full seasons, while making a few appearances for Baltimore in 1962 and 1963. After a full season on the farm in 1964, he split the 1965 season between triple-A and Baltimore's starting rotation.

Although he was with the team for all of 1966, John didn't appear in the World Series, since 3 of the 4 games were complete-game shutouts. 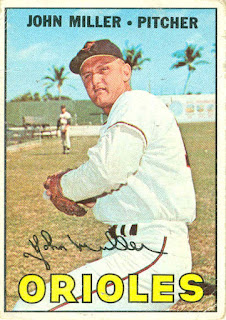 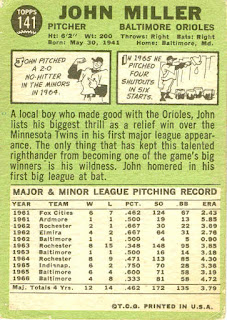 John's career went downhill after 1966. After 2 games with the O's in 1967, he was sold to the Mets on May 10th, and spent the rest of that season as a reliever in triple-A. He started 19 games in the single-A Carolina League in 1968 before retiring.

Posted by Jim from Downingtown at 11:02 PM 3 comments:

Wagner was signed in 1961, and upon joining the Phillies in April 1965, he became such a key member of their bullpen that the Phillies traded away their long-time ace Jack Baldschun after the season. 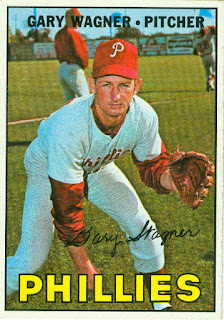 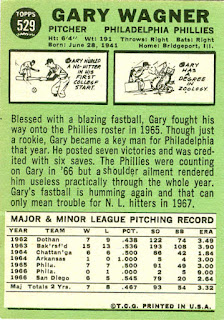 Gary couldn't capitalize on that situation, as he spent most of the next 2 seasons in the minors as a starting pitcher, before returning to the Phillies' bullpen full-time in 1968. That season he went 4-4 with a 3.00 ERA in 44 games as the #2 man in the bullpen behind Turk Farrell.

After spending most of 1969 back in the Phillies' farm system, he was traded to the Red Sox in early September and spent the remainder of that season and most of 1970 pitching for Boston.

The Red Sox released him just before the start of the 1971 season.
Posted by Jim from Downingtown at 12:13 AM 2 comments:

Topps chose a less-than-flattering photo for George Smith's final card (#444). George's major-league career was over before this card hit the streets. In fact, he's one of 11 players with their own card in the set who didn't play in the majors after 1966.

George began playing baseball in 1955 with his hometown St. Petersburg Saints, an unaffiliated class-D team in the Florida State League. After being out of baseball during '56 and '57, he was signed by the Tigers in 1958.

Smith played in Detroit's minor league system every season from 1958 to 1965, while also appearing in 52 games for the Tigers in 1963, and a handful in '64 and '65. Although primarily a 2nd baseman, he played a lot of 3rd base and outfield in the minors during the 1963 season. 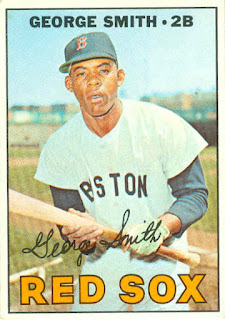 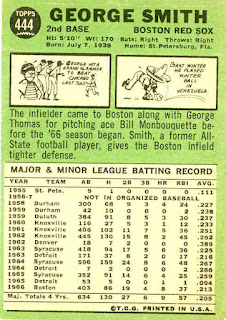 Immediately after the 1965 season, he and outfielder George Thomas were sent to the Red Sox for veteran pitcher Bill Monbouquette. Smith took over the starting 2nd base job from the departed Felix Mantilla (who coincidentally, was also one of the 11 players in the 1967 set who didn't play after 1966).

George's employment in Boston only lasted one season, as rookie Mike Andrews took over the reins at 2B starting with game #7 of the pennant-winning 1967 season. (Rookie centerfielder Reggie Smith started at 2B for the first six games of the season.)

George spent the 1967 season as a backup 2nd baseman for the Giants' triple-A team in Phoenix. He did the same thing in his final season (1968), splitting time between the Astros' and Senators' triple-A teams.

Smith died in his hometown of St. Petersburg, FL in 1987, about 3 weeks short of his 50th birthday.
Posted by Jim from Downingtown at 1:56 PM No comments: