When I first started following the Phillies in early 1967, Jackie Brandt (#142) was a little-used 6th outfielder, about to be sold to the Houston Astros in a few weeks. Nothing said "SCRUB" more than that. What I didn't realize at the time was, there's a difference between a "career backup" (Doug Clemens) and a "former everyday major-league starter who's now at the stage of his career where he's a little-used 6th outfielder" (Jackie Brandt).

Brandt was signed by the Cardinals in 1953 and spent 3 seasons in their farm system.

His major-league debut came on April 21, 1956 with the Cardinals. In mid-June, he was traded to the New York Giants as part of a 9-player trade. (Three of the other players were future managers Red Schoendienst, Alvin Dark, and Whitey Lockman.) He was part of a left field platoon with Dusty Rhodes. 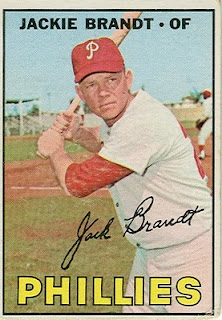 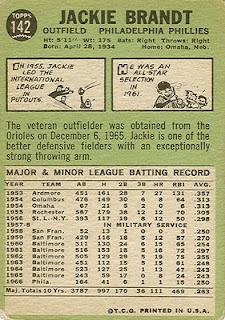 1959 to 1964 were Brandt's prime years. Each season, he played in 137 or more games, and had 470 or more plate appearances. After one more full season with the Giants, Jackie was traded to the Orioles following the 1959 season.

Brandt became Baltimore's everyday center fielder from 1960 to 1964, although he also made 42 starts in right field in 1961.

In 1965, rookie Paul Blair took over in center field, which was the beginning of the end for Brandt. He was relegated to pinch-hitting and backing up all 3 outfield positions. Jackie and Sam Bowens competed for the job of 5th outfielder.

After the 1965 season, Brandt was traded to the Phillies with rookie pitcher Darold Knowles for veteran reliever Jack Baldschun. Here he was used mostly to pinch hit, and as a backup in center field.

After rarely playing in early 1967, Brandt was sold to the Astros in early June. Appearing mostly as a pinch-hitter and backup first baseman, he was released on September 9th.
Posted by Jim from Downingtown at 12:11 AM