By the time I started collecting baseball cards in 1967, Jim Landis (#483) was a part-time player at the end of his career. I remember thinking "He wasn't a starter so he probably wasn't that good." What did I know? Little did I realize that he had been the starting centerfielder for the White Sox from 1958 to 1964, collected 5 gold glove awards, and played in the 1959 World Series!

Jim played in the White Sox organization in 1952 and 1953, then missed the next 2 years for military service. He returned to baseball in 1956, and made his major-league debut with the White Sox in early 1957. 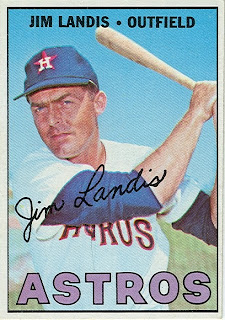 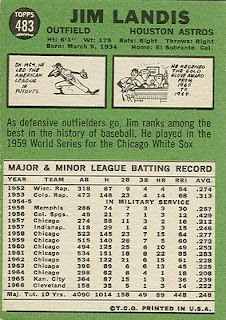 Landis was the Athletics' regular centerfielder in 1965, receiving more playing time than he had the previous season in Chicago. After 1 season in Kansas City, he was traded to the Indians for catcher Phil Roof and a minor-league outfielder named Joe Rudi.

In mid-August he was released, only to be signed by the Boston Red Sox on August 22nd. However, six days later he was released. (This was just after Tony Conigliaro was beaned, and the Red Sox were looking for help in right field. After 1 start, they must have decided that Jim Landis was not the answer. Ken Harrelson was signed as their new right fielder.)

Jim was one of 5 players to play for more than 2 teams in 1967 (along with Jim King, John Buzhardt, Jack Lamabe, and Ken Harrelson).
Posted by Jim from Downingtown at 12:46:00 PM