It's the start of a new year, so I thought I would survey my collection of vintage cards (click to enlarge): 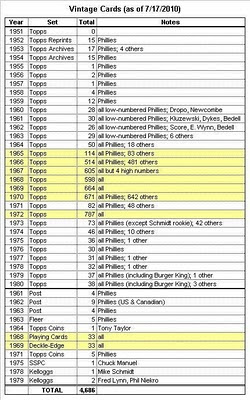 The release of the 1979 and 1980 Burger King Phillies sets, coupled with the Phillies winning the 1980 World Series, got me started in the hobby again. I decided to limit my collecting to:

B) Collecting the Phillies cards from all years

B. During the 1980s and early 1990s, I collected Phillies cards from 1964 (an arbitrary starting date, based mostly on economics) up through 1993. This included:

With the Phillies winning the World Series in 2008, I got back into card collecting. Interests since late 2008 include:

Sometime in the last 20 years, my 1969 cards of Willie Mays, Johnny Bench, and Rod Carew went missing. I have recently replaced these. 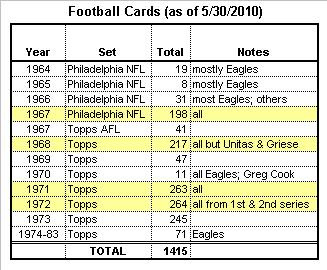 Posted by Jim from Downingtown at 11:59 PM