Today I am reviewing the 1967 Cubs, as requested by Wrigley Wax a few weeks ago. Since I was not as familiar with this team as I was with the 1967 Phillies (or even the 1967 Cardinals), this required a bit more research, especially into the details of the pitching staff. 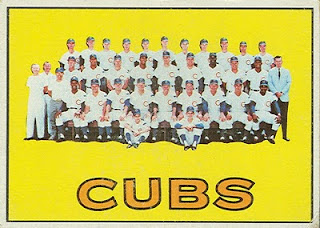 Here is the last Cubs team group photo for awhile. When Topps resumed team photo cards in the 1970s, they used "floating heads" on the Cubs' team card for several years.

Here are the Cubs' starters for 1967. The season began with a rotation of Jenkins-Holtzman-Simmons-Culp, with Rich Nye getting the odd 5th start. Because of National Guard committments, Ken Holtzman didn't pitch from 5/21 through 8/12, so the rotation was adjusted in late May to Jenkins-Nye-Simmons-Culp-Niekro. Curt Simmons' final start was on July 7th, and was replaced in the rotation by a combination of Bill Hands, Rob Gardner, and Bob Shaw (the latter 2 acquired from the Mets during the season). By the time Holtzman returned in August, the rotation was Jenkins-Niekro-Hands-Nye-Holtzman (with Ray Culp relegated to the bullpen). From 9/10 through the end of the season, the Cubs went with a 3-man rotation (Jenkins-Nye-Niekro).

Chuck Hartenstein (who was not on Topps' radar in 1967) led the Cubs with 10 saves. He pitched 45 games, all in relief. Bill Hands also pitched 38 games in relief, to go with his 11 starts. Bill Stoneman, Cal Koonce, and Dick Radatz were the other primary relievers. Niekro and Culp also spent significant time in the bullpen.

Bob Shaw was picked up from the Mets in late July and was used mostly in the bullpen. Bob Hendley relieved in 7 games, then was traded to the Mets in mid-June. Pete Mikkelsen was claimed off waivers from the Pirates in early August, and made 7 relief appearances. 37-year-old Don Larsen was called up from triple-A for 2 weeks in July and pitched in 3 games.

Most of the Cubs' starting 8 were all-stars at one time or another. Right fielder Ted Savage began the season with the Cardinals, but joined the Cubs on May 14th. He pulled more starting assignments in RF than Lee Thomas and Al Spangler.

These were the Cubs' primary substitutes, all playing in more than 50 games. Clarence Jones, Al Spangler, and Lee Thomas were all used primarily as pinch-hitters and right fielders. Jones and Thomas also saw some action at 1st base. Paul Popovich was the 2B-SS backup, then was traded to the Dodgers for outfielder Lou Johnson after the season. Since Ron Santo played 161 games at 3rd base, there was no need for a backup there.

John Stephenson came over from the Mets in the Bob Hendley trade in mid-June. John Boccabella's catching resume in 1967 consisted of one 9-inning game. He was mostly used as a pinch-hitter and corner outfield reserve. George Altman spent most of the season at triple-A Tacoma, while Byron Browne played mostly for double-A Dallas-Ft Worth.

Other assorted Cubs' employees: Career minor-leaguer Norm Gigon parlayed a good showing in his major-league debut in 1967 into a late-season Topps Rookie Stars card, then quickly faded away. Utilityman Jim Stewart (replaced by Paul Popovich) was sold to the White Sox in late May. Long-time veterans Joey Amalfitano and Dick Bertell played less than 5 games each, and were released by mid-season.

Leo Durocher was also the Cubs' manager in 1966, but apparently that wasn't enough time for Topps to get a new photo, since he's shown in his Dodgers' uniform here. The other 3 guys didn't play for the Cubs in 1967.

Topps misfired with 3 of these 6 players. Niekro and Nye were solid additions to the starting rotation, and Popovich was a serviceable utility infielder. Connors and Dowling did not play for the Cubs in 1967. (Hartenstein and Stoneman would have been better choices for that card.) Upham appeared in 5 games for a total of 1.1 innings, while compiling a 33.75 ERA. Wrigley Wax recently looked into Upham's short career.


Next up: Washington Senators (requested by Spiff from "Texas Rangers Cards")

Do you have a favorite team you'd like me to post next?
.
Posted by Jim from Downingtown at 6:34:00 PM

Billy Connors was the Cubs pitching coach for a long time in the 80s. The exact same photo was used for another Rookie Stars card of Dowling, for the Cards. Mantilla was injured in spring training and was released after recovering.

Thanks for the tip on Mantilla. I used to wonder why he would have a late-series card if he had "retired in 1966".

Santo is one of my all time favorite players as is Billy Williams.

And, I love the All - Star Rookie cards, especially from the 1960's with the big trophy's on the cards!

What a great treat it was to root for this team. It was the first real good Cubs team I ever pulled for. As a Cubs fan for almost 50 years, I rate this club as my second favorite to the 1984 squad.