Here is Barry Latman (#28), at Yankee Stadium in an Angels uniform. It's been over a year since Latman was traded to the Astros, but it seems that Topps never let a little thing like the photographer's "to do" list get in the way of a vacation!

Latman was signed by the White Sox prior to the 1955 season, and played 3 seasons in the minors (almost exclusively as a starting pitcher) before making his major-league debut in September 1957. After that 7-game cup of coffee, he was back in the minors for most of 1958, but played in 13 games for the White Sox.

In 1959, Barry was with the Sox for the entire season. For the next 6 years, he would start and relieve (about 50/50). After the 1959 season, Latman was traded to the Indians for pitcher Herb Score. 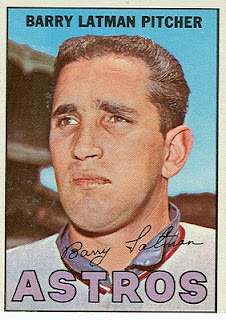 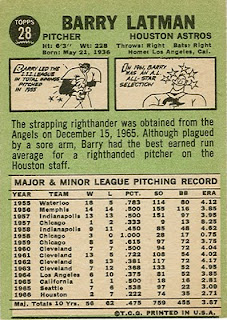 After the '63 season, Latman and Joe Adcock were shipped to the Angels for slugging outfielder Leon Wagner. [Based on Adcock's age, Latman's ineffectiveness, Wagner's power numbers in the early 1960s, and no reason to believe the Wagner would lose it by 1968, it seems like this was a bad deal for the Angels at the time.]

Anyway, Latman continued his pedestrian career on the west coast: another bad year in 1964, and a trip to the minors for most of 1965. The Angels dumped him on the Astros after the 1965 season.

After 1 1/2 seasons in Houston, the Astros had seen enough - releasing him in August 1967.
Posted by Jim from Downingtown at 8:35 PM