Today marks the 10th anniversary of this 1967 blog (my first of many). I found Blogger a day earlier when I happened across this post on the 1969 set blog (which was run by someone else at the time). I made a non-anonymous comment there, but didn't actually have a blogger account at that time.

I took ownership of the 1969 set blog from the previous owner in January 2012, after it had been idle for a few years.

Yes, it's a lot of blogs, but I have an interest in all the sets (well, not enough in the 1963 set, as you've probably noticed). At the 5-year mark I took a 12 month break, although at the time of my 5-year post, I wasn't sure if I would be returning.

A few months ago I was considering whether to take another break at this 10-year mark, but there's still a few projects I want to complete (1969 Final Cards, the remaining 5 team reviews, the '69 and '70 League Leaders) before I go on hiatus again. I have been slacking off this past summer, so what I thought I could finish by this week hasn't happened.

Although there's 160 unposted players and managers listed in my blog index, I am only planning on blogging around 100 of them. After that, who knows?

So who's the high-profile player I saved for my 10th anniversary post? (Oops!) Ok, Joe Moeller will have to do. 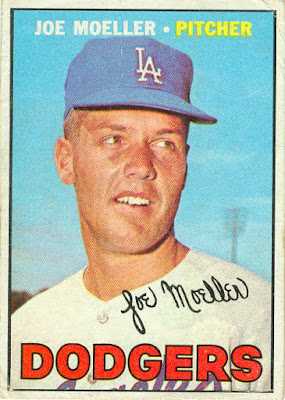 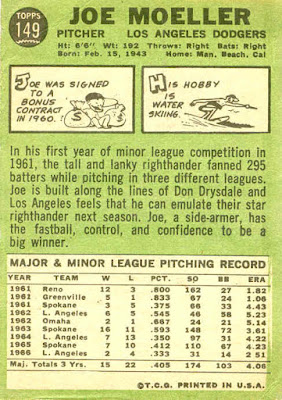 Joe managed to stay with the Dodgers for all of 1969-71, but those were his final big-league days.

He pitched in the minors for the Padres and Phillies in 1972 and 1973, before retiring. 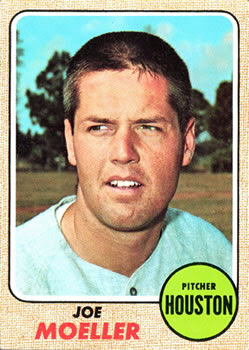 and this "variation" that was the first post on my 1968 blog. 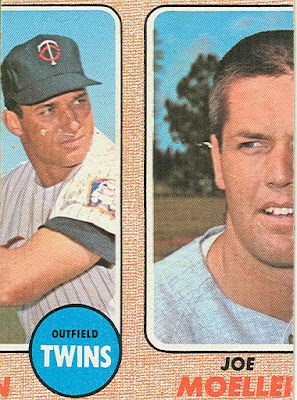 Congrats! And thanks for posting the first '67 card I ever owned on the occasion!

Thanks Night Owl. As it turns out, Moeller is the last Dodger card I have to be posted across all my blogs. (I still have Mike Kekich, Jim Campanis, and Jim Fairey to go, but they will be with other teams.)