Dave Morehead had an 8-year career from 1963 to 1970.  After 6 seasons with the Red Sox, he played his final 2 years with the Kansas City Royals.

Morehead was signed by Boston in 1961 and made his big-league debut in April 1963 by shutting out the Senators. A month later he pitched a 1-hitter against Washington. (If only all his starts could be against the Nats!) 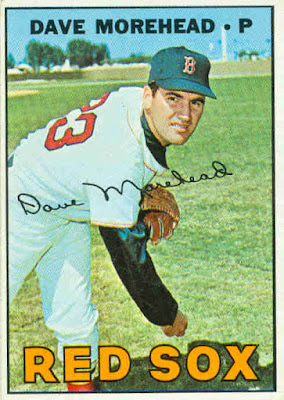 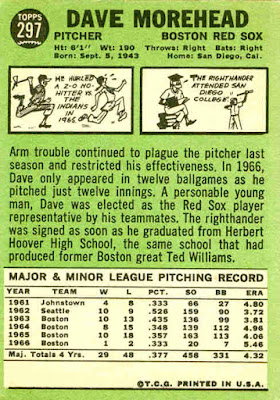 For his first 3 seasons he was a starting pitcher, making around 30 starts per season, and pitching from 165 to 190 innings per year. His strikeout totals those years were 136, 139, and 163. Although he led the AL with 18 losses in 1965 (the Sox lost 100 games that year), he remained in the starting rotation, and pitched a no-hitter against the Indians in September.

The bottom fell out of his career in 1966. As the back of his card says, he had arm trouble limiting him to just 12 games. This continued to plague him through the 1969 season. Whereas he was routinely starting 30 games and pitching 160+ innings, he averaged just 11 games and about 34 innings for the Sox from 1966-68, while spending a good deal of time in the minors.

After the 1968 season, he was selected by the Royals in the expansion draft. He spent part of 1969 in the minors, and although appearing in 21 games for KayCee, only 2 were starts, and he pitched only 33 innings while compiling a 5.73 ERA.

Dave finally bounced back in 1970, starting 17 of his 28 games and posting a 3.62 ERA in 121 innings. Although only compiling a 3-5 record, his other stats were good compared to his previous 4 seasons.

Arm troubles resurfaced, and he was released during spring training in 1971.
Posted by Jim from Downingtown at 12:18:00 AM