Aurelio Monteagudo – Why Does He Have a Card?

As Ed McMahon always said to Carnac, “I hold in my hand the last…”

There were 490 players with their own card in the 1967 Topps set. Before today, I had blogged about 489 of them on one or another of my set blogs. And now, last but (not?) least… 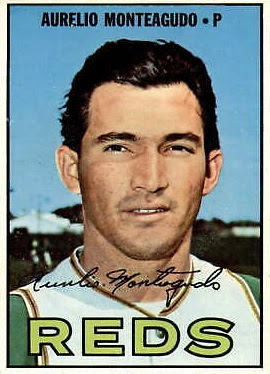 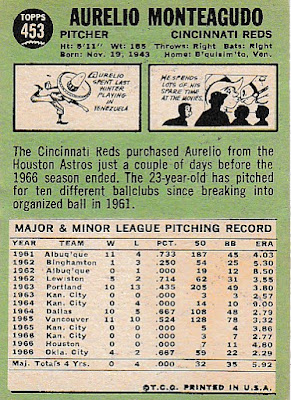 It seems like over the years, Aurelio Monteagudo had more Topps cards than games played. Let’s check out my hunch: 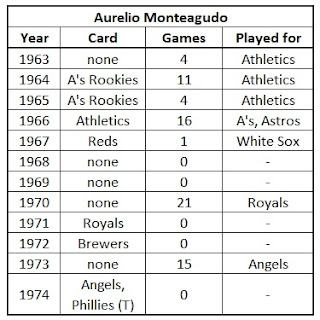 Ok, it’s not as drastic as I had imagined, but after 1966, when he did have a card he didn’t play for that team, and when he did play, he didn’t have a card that year. He's also had more cards than seasons played.

Aurelio made his major-league debut in September 1963 with the Athletics, appearing in 4 games in relief. In 1964 he pitched in 11 games, starting half of them. Those would be his last major-league starts except for his one game with the White Sox in 1967.

At the end of the 1966 season, the Astros sold him to the Reds, but he never played for the Reds in the majors or minors, and was released in mid-July.

In June 1969 he was traded to the Cardinals for pitcher Dennis Ribant. Playing no games for St. Louis, he was selected by the Royals in the post-1969 minor-league draft. He started the ’70 season in the minors, but pitched 21 games for the Royals in the second half, before returning to the minors for all of 1971. (Wow, Topps had their hands full dealing with his yo-yoing career!)

In November 1971 he was selected by the Brewers in the Rule 5 draft. (Ok, that explains his 1972 card with the Brewers.) However, he was released during spring training, having never played for Milwaukee. The same day, the Padres took THEIR turn on this merry-go-round, but by mid-June they swapped him to the Angels for infielder Ron Clark.

Aurelio pitched 15 games for the Angels in the second half, then was dealt to the Phillies in December. Monteagudo never played for the Phillies, but did show up as a Phillie in the 1974 “Traded” subset. (If you couldn’t make the 1974 Phillies’ bullpen, you know it’s time to hang them up.)

That’s exactly what he did, moving down to Mexico where he was primarily a starter for 4 different teams from 1974-80.

There have been 3 players named Aurelio in major league history. All 3 were killed in car accidents between the ages of 44 and 52.

So, I have posted all the 1967 player cards I planned to, but that's not the end of this blog.  I still need to complete my team reviews for the Astros and the Mets, then just freelance whatever comes along.

It was never my intent to post about every card in this or any other set.  Rather than blogging about cards, I have been blogging about players. My intention was to write about every player that appeared in the 1966 to 1969 sets, and every significant player in the 1970 set, but not necessarily repeat a player on multiple blogs. I have now reached that point on my '66 and '67 blogs, and I'm 6 cards away on my '68 blog.
Posted by Jim from Downingtown at 11:27 PM 2 comments: