Rico Carty was the Braves' regular left fielder in the mid-to-late 1960s. I remember him most as the first player to get a starting all-star berth as a write-in candidate. 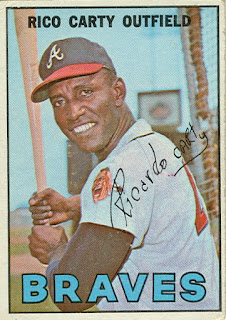 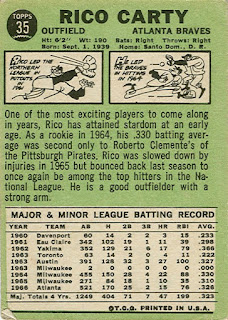 During his rookie season in 1964, Rico compiled a .330 batting average (2nd behind Roberto Clemente). He also finished 2nd in the NL Rookie of the Year voting behind Richie Allen.

Carty hit over .300 during the 1965 and 1966 seasons, while his defensive shortcomings were nicely hid as the left fielder. He also started 14 games behind the plate in 1966, despite regular catcher Joe Torre being in the lineup at 1st base (I can't figure that one out!)

Carty missed another entire season (1971) with a knee injury, and was never the same after that. Following the 1972 season, he was traded to the Rangers, and spent the remainder of his career bouncing around to several teams (primarily the Rangers, Indians, Blue Jays) as a DH and some-time outfielder.

Carty retired after the 1979 season.
Posted by Jim from Downingtown at 8:29 PM 2 comments: