Here is the 2nd of Bill Heath's 3 Topps baseball cards. Bill was signed by the Phillies in 1960, and played 5 seasons at all the Phillies' minor-league outposts of the day (Bakersfield, Chattanooga, Williamsport, Arkansas). Along the way, some of his teammates down on the farm were Dick Allen, Fergie Jenkins, Danny Cater, Ray Culp, Jack Hamilton, and Pat Corrales. Unfortunately for Heath, they all went on to more significant major-league careers than Bill. Always a catcher, Heath spent the 1963 season playing 3B-OF, since his Chattanooga team had phenom Pat Corrales behind the plate. 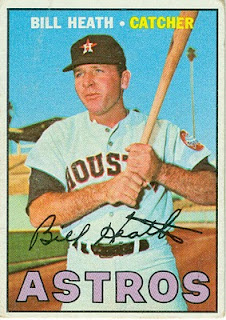 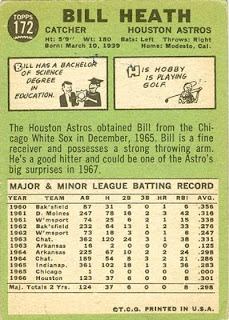 Bill never made it to Philadelphia. After the 1964 season, he was traded to the White Sox for pitcher Rudy May. He made his major-league debut with the White Sox on OCTOBER THIRD. That was soon followed by a another trade: the Sox sent him and outfielder Dave Nicholson to the Astros for pitcher Jack Lamabe.

After 9 games in 1967, Bill was sold to the Tigers, where he brought up the rear on the depth chart behind all-star Bill Freehan and rookie Jim Price. He spent most of 1967 and all of 1968 back in the minors, before resurfacing with the Cubs for part of the 1969 season.

That stint may have earned him his final Topps baseball card in the 1970 set, as a member of the Cubs. Someone forgot to tell the Cubs brass, as Heath spent his final season (1970) playing for the Cubs' AAA team in Tacoma.
Posted by Jim from Downingtown at 10:17 PM No comments: