Here is the last card for Dwight Siebler (#164). My card has a severely stubbed top right corner, a casualty found on many of my 1st and 2nd series 1967 cards. I didn't start buying cards until May or June of that year, so the early cards were acquired through the time-honored "tossing cards" method. I didn't start "taking care" of my cards until about the 5th series!

Siebler was signed by the Phillies in 1958, and pitched for 5 seasons (1959-63) in their farm system, the last 3 in triple-A. He was purchased by the Twins in late August 1963, and 2 days later made his big-league debut. Dwight remained with Minnesota to the end of the season, but he spent most of 1964 and 1965 pitching in triple-A, while playing less than 10 games with the Twins in each season. 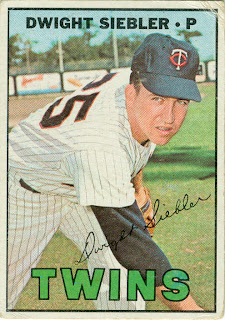 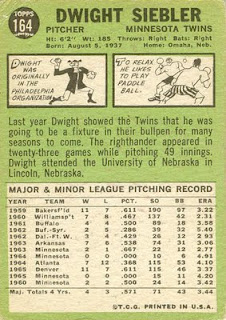 Siebler was back with the Twins for the entire 1966 season, which would be his only full season in the majors. Dwight started off the 1967 season with the Twins, but after only 2 appearances in late April, he was back in AAA, compiling a 4-10 record primarily as a starter, before retiring after the season.
Posted by Jim from Downingtown at 10:05 PM 2 comments:

Last week, I signed up on the Zistle.com site, after reading about it on The Phillies Room blog. So far, I've got all my baseball cards from 1952-80, and all my football cards (1964-79) entered. Check it out using the link at the top of my sidebar.

Now, where was I..., oh yeah, Orlando McFarlane.


This is the final card for backup catcher Orlando McFarlane (#496), one of four players named Orlando in the 1967 set. McFarlane was signed by the Pirates in 1958, and toiled in their system though 1963 (although getting an 8-game cup of coffee in 1962). In 1960, he played at 3rd base more than as a catcher, and also saw action at shortstop.

In 1964 he spent the entire season with the Pirates, but only played in 37 games. The following season, he was back in the minors all year, but split his time between the Pirates' and Senators' farm teams. 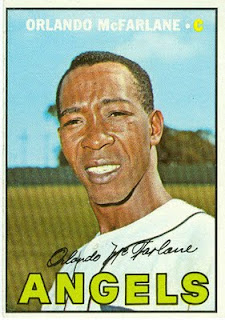 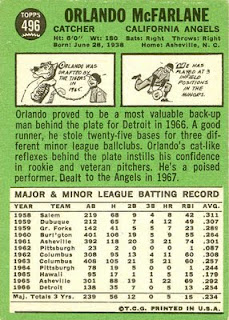 After the 1965 season, he was selected by the Tigers in the Rule 5 draft. Orlando spent the entire 1966 season in Detroit as Bill Freehan's backup. Just before the 1967 season started, he was traded to the Angels, as we see on the back of this late-series card. (This trade happened so last-minute that Topps only included 1 Tigers' catcher (Freehan) in the 1967 set, while having 4 Angels' catchers!) He was ticketed as the 3rd-string catcher behind Bob Rodgers and Tom Satriano, but he must have been injured in mid-season, because he only played 12 games for the Angels (none after June 3rd) and no games in the minors.

In 1968 McFarlane spent most of the season with the Angels' triple-A team in Seattle, but did play 18 games for the Angels. That would be his last major-league action, as not even the creation of 4 expansion teams could keep him in the majors. During 1969 and 1970, he played for the Angels' and Mets' triple-A teams.
Posted by Jim from Downingtown at 9:10 PM 3 comments:

No Phillies card in over a year! That won't do...

Naturally, the Phillies decided that the time was right to trade for him - another veteran Cubs' starting pitcher on the downside of his career. At least it only cost them Ray Culp this time! 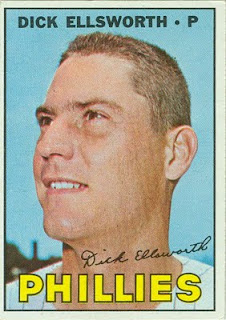 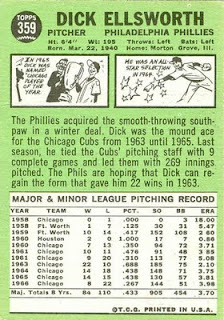 Ellsworth only lasted one season with the Phillies (and was only in the rotation for the first half of the season). In December 1967, he was traded to the Red Sox (with catcher Gene Oliver, whose stay in Philadelphia was shorter than Ellsworth's) for young catcher Mike Ryan.

Dick pitched for the Sox until April 1969, when he was part of a 3-for-3 swap with the Indians. Ellsworth wrapped up his career with the Brewers from August 1970 to June 1971.

Posted by Jim from Downingtown at 8:43 PM No comments: