Brown was signed by the Giants in 1962 and was a pitcher and outfielder in the minors (pitching a no-hitter in 1963). He made his major-league debut with the Giants in September 1965. 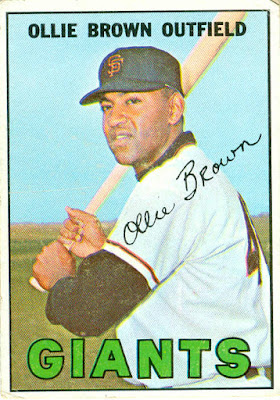 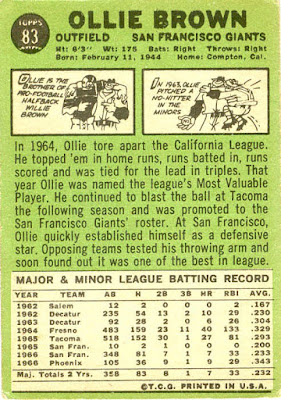 After 2 seasons as a regular outfielder, Brown got squeezed out in 1968 when a) 3rd baseman Jim Ray Hart was moved to left field (Alou sharing RF with Brown), and b) rookie Bobby Bonds was called up in mid-season and took over the right field job.

Now that Hart and Bonds were outfield regulars, both Brown and Jesus Alou were left unprotected in the expansion draft, with Alou selected by the Expos and Brown by the Padres. Ollie provided some offensive punch during the Padres’ early years, hitting 20 and 23 homers in ’69 and ’70, while batting .292 in 1970. He started over 130 games in right field in each of his first 3 seasons in San Diego.

In May 1972 he was traded to the Athletics for outfielder Curt Blefary and pitcher Mike Kilkenny. He barely had time to unpack his suitcase when he moved on to the Brewers five weeks later.

After the 1973 season, Brown was part of a nine-player trade with the Angels. However, he never played a game for California as he was sold to the Astros during spring training in 1974.

By mid-June ’74 he was claimed off waivers by the Phillies, and spent his final 3 ½ seasons as a pinch-hitter and backup outfielder for Philadelphia. He also played in the ’76 and ’77 NLCS.

Brown’s younger brother Oscar was an outfielder for the Braves from 1970 to 1973. His older brother Willie (not the Raiders’ All-Pro cornerback) played for the Rams and Eagles.