The back of this high-numbered card says "[Ty Cline will] be Atlanta's #1 left-handed pinch-hitter and reserve outfielder", but by the time this card had come out in late-summer, Ty was long gone. He was sold to the Giants in late-May, with Gary Geiger continuing in the “Atlanta’s #1 left-handed pinch-hitter and reserve outfielder” role that he had also manned in 1966. 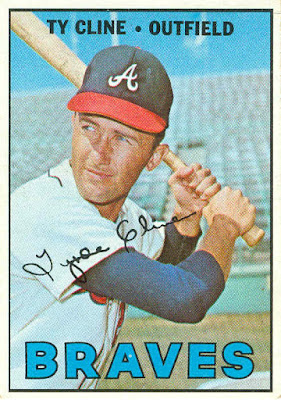 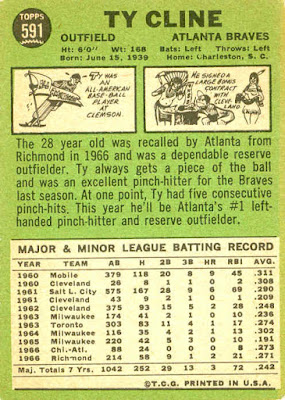 After appearing in 10 games for Atlanta in 1967, he moved on to the Giants in May, filling the 5th outfielder role for the remainder of 1967.

With regular outfielder Ollie Brown missing most of the 2nd half in 1968, Cline saw more action in the outfield than he normally would have, splitting the left field assignments with 3rd-baseman Jim Ray Hart, while also filling in at the other 2 spots.

After the 1968 season, Cline was drafted by the expansion Montreal Expos, and was 1 of 9 center fielders used by the Expos in their 1st season.

Ty must have began the 1970 season on the DL, because his first game wasn't until June 10th. After a 2nd appearance 3 days later, Cline was traded to the Reds. Good for him! He went from worst-to-first, as the Reds made it to the World Series that season. Cline had 1 at-bat in the NLCS (a triple), and 3 at-bats in the Series (.333).

After one more season on the Reds' bench, Cline was released in January 1972.
Posted by Jim from Downingtown at 6:27 PM No comments: