I last posted a 1967 team review in August 2016 (and that was after a 2-year delay since the previous one), so today’s post is long overdue. I have 7 more teams to review after the Reds, but those should occur more frequently now, since I only have about 100-120 player cards remaining (and only about a dozen stars). The upside to this delay is that most of these Reds players' cards have already been posted, so there are links to follow. 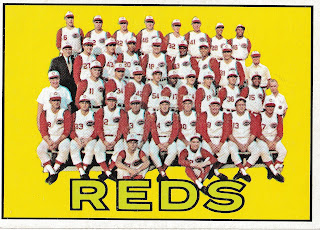 Here are the Reds, pictured in their 1966 uniforms. I think that was the last year for the vests and white hats (if Gary Nolan's and Lee May's 1968 cards are any indication). I seem to recall that the Reds spent a lot of time in first place in 1967. Unfortunately for them, September and October were not included in that run.

Only Gary Nolan, Tony Perez, Pete Rose, and Johnny Bench would still be around for Cincinnati's "Big Red Machine" days.


The first 5 are the starting pitchers, in order of innings pitched:

Gerry Arrigo was a reliever and spot starter for the Reds in 1967. He and McCool were the only lefthanders on the 10-man full-season staff. Bob Lee was acquired from the Dodgers at the end of May, and pitched 50 innings in 27 games, all but one in relief.

Jack Baldschun spent most of the season in AAA, only pitching 13 innings across 9 games, all from mid-June to late-July. Ted Davidson’s season mirrored Baldschun’s – 13 innings pitched in 9 games, his all in September.


Here are the starting eight players:

Johnny Edwards was the Reds’ catcher from 1961 until 8/28/1967 – the day Johnny Bench made his 1st start. In his final season with the Reds, Deron Johnson split his time between 1st base and 3rd base.

Tommy Helms was the 1966 Rookie of the Year at 3rd base, but moved to 2nd base in 1967 and made 2 consecutive All-Star teams. Chico Cardenas was the Reds’ regular shortstop from 1962-68, making 4 All-Star teams during that time.

Vada Pinson started 156 games in center field, and led the NL with 13 triples in 1967. Tommy Harper started 87 games in right field, but was out of the lineup from late-May to late-July, and also the season’s final 2 weeks.


Here are the bench players, in order of at-bats:

Lee May started 68 games at 1B and 47 more in the outfield in his rookie season. He had more at-bats than all but Pinson, Perez, Rose, and Helms. Chico Ruiz started 47 games at 2B, mostly in July when Cardenas was out of the lineup (with Helms moving to SS).

Don Pavletich started 57 games at catcher (same as Edwards), but with the arrival of Bench, neither of those 2 were going to see any more playing time. Art Shamsky was a left-handed pinch-hitter, also starting a few dozen games at the corner outfield spots.

Floyd Robinson was primarily a pinch-hitter, but also started 30 games in right field. Jimmy Coker was the #3 catcher, starting 22 games (mostly in late-June and early-July when Edwards was unavailable).

Johnny Bench made his major-league debut on August 28th, and started 26 of the final 36 games. Dick Simpson had 54 at-bats in 44 games, mostly as a pinch-hitter.

Jake Wood was acquired from the Tigers in late-June for infield depth. Gordy Coleman was the Reds’ 1st baseman for the first half of the decade, but lost playing time to Perez in 1966, and with May joining the team in ’67, was a spare part. After playing 4 games during the first month, Coleman played in AAA for the rest of the season.

Len Boehmer (shown on his 1969 Yankees Rookies card) had 2 pinch-hitting appearances during a mid-season callup. John Tsitouris was a regular starter for the Reds from 1963-65, but only pitched 2 games in 1967.

Darrell Osteen pitched 11 games in relief for the Reds, all before mid-June. He also appeared with Lee May on the 1966 Reds Rookies card.

9/18/67 - Traded Len Boehmer to the Yankees for pitcher Bill Henry.

10/20/67 - Traded Floyd Robinson and Darrell Osteen to the Athletics for pitcher Ron Tompkins.

11/8/67 - Traded Art Shamsky to the Mets for infielder Bob Johnson.

11/21/67 - Traded Tommy Harper to the Indians for pitcher George Culver and 1B Fred Whitfield. 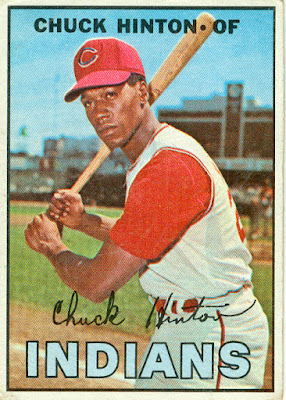 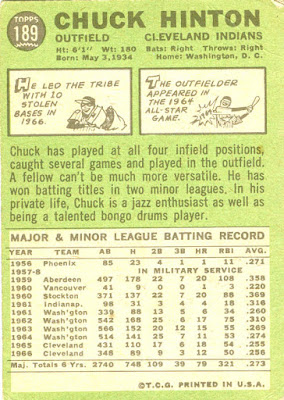