Pinson was signed by the Reds in 1956, and played 3 seasons in the minors as an outfielder. He also pitched in 3 games. Pinson made his major-league debut in April 1958, at age 19. He began the season as the Reds’ starting right fielder, but was sent back to the minors in mid-May, where he remained until September. 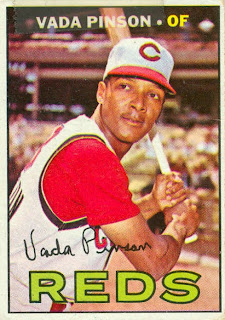 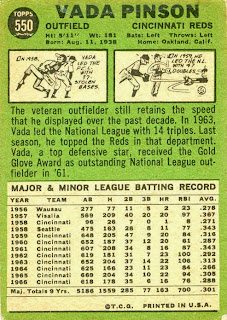 After his long run in Cincinnati, Pinson was traded to the Cardinals in October 1968 for outfielder Bobby Tolan and pitcher Wayne Granger. He replaced the retired Roger Maris in right field, then moved on to the Indians (in exchange for outfielder Jose Cardenal) after only one season in St. Louis.

Vada spent 2 seasons in the city by the lake as their starting right fielder (’70) and center fielder (’71), then he was on the move again. This time he was traded to the Angels for his old Reds’ teammate Alex Johnson. (Wow, the similarities between Pinson’s later career and Johnson are eerie. They both played for the Reds, Cardinals, Indians, and Angels, and both players moved around frequently.)

Pinson played for the Angels during the 1972 and 1973 seasons, where he was their primary left fielder but also started a few dozen games at the other 2 spots.

Vada played right field for the Royals in ’74 and ’75, then was released in December 1975. The Brewers signed him in January 1976 but released him 4 days before the start of the season, ending his 18-year career.

He passed away in October 1995 after suffering a stroke, at age 57.
Posted by Jim from Downingtown at 8:20 PM

I couldn't help but notice a slight resemblance to Ian Desmond of the Washington Nationals.