This was one of the first cards I remember getting in 1967. As card #129, this was in the 2nd series, issued about the time I began collecting baseball cards (May 1967).

I remember that the first time I saw this card, I asked my brother if the “Athletics” were maybe a minor-league team, because I hadn’t heard of that team before. (Most likely, because the Athletics were not found on one of the baseball jackets my brother and I had back in the day.) 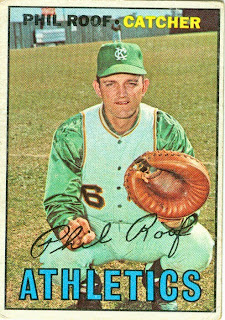 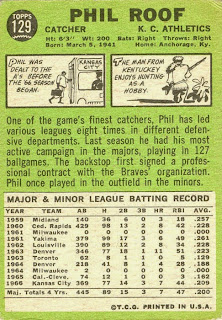 After the 1964 season, the Braves traded him to the Angels for pitcher Dan Osinski. Roof played in the majors for the entire 1965 season, but only lasted with the Angels until mid-June.

After only playing 9 games as Bob Rodgers' backup, Phil was shipped to the Indians for outfielder Bubba Morton. He finished out the season with Cleveland, mostly as a pinch-hitter and 3rd-string catcher.

In December 1965, Roof was traded to the Kansas City Athletics (with outfield prospect Joe Rudi) [I learned something new today!] for veteran outfielder Jim Landis. Phil became the Athletics’ regular backstop for 1966 (119 starts) and 1967 (107 starts).

He missed most of the 1968 season due to a torn shoulder muscle, and was replaced by Jim Pagliaroni and Dave Duncan.  Phil returned to the starting job in 1969, starting 83 games behind the plate (to Duncan’s 40).

Prior to the 1970 season, Roof was traded to the Brewers with pitchers Lew Krausse and Ken Sanders, and outfielder Mike Hershberger, for 1st baseman Don Mincher and utility infielder Ron Clark. Roof was the team’s #1 catcher in 1970, but after losing that spot in May 1971, he was traded to the Twins in July.

Roof then spent 5 seasons as the Twins’ backup catcher. (In 1974, he didn’t play in his first game until June 4th!) In August 1976 he moved on to the White Sox, playing in a few games with Chicago that season, and 3 games for the Blue Jays in 1977.

After his playing career, Roof was a bullpen coach for several teams from the late 1970s to early 1990s.  He later managed in the Twins' farm system for 16 seasons, until retiring in 2005.
Posted by Jim from Downingtown at 10:31 PM

Phil is one of only two players to have seen action with both the Toronto Maple Leafs (AAA) and the Blue Jays. (Rico Carty is the other)

Phil is also the 1st player signed by the Blue Jays. He was acquired prior to the expansion draft.

Epitome of a journeyman