Someone once said "Cleveland Rocks!", but it probably wasn't an Indians fan in the 1960s-1980s. Between 1961 (when the AL expanded to 10 teams) and 1994 (when the leagues were split into 3 divisions each), the Indians finished higher than 5th place (or 4th place after divisional play) only once.  In 1968 they finished in THIRD place, but 16.5 games behind the Tigers.


Here are all the players (who had cards) seeing action with the Cleveland Indians in 1967. The tribe had good starting pitching during the mid-to-late 1960s (with Sam McDowell at or near the top in all 3 AL pitching categories, and often accompanied by one or more of his teammates), but they always seemed to finish in 5th or 6th place (and finished 8th of 10 in 1967).

John O'Donoghue was 8-9 as the 5th starter, and relieved in as many games as he started. Orlando Pena was purchased from the Tigers on May 6th, and went on to lead the staff with 8 (!) saves. Reliever George Culver went 7-3 in 53 games during his rookie season, then was traded to the Reds for Tommy Harper after the season. Bob Allen was 0-5 over 47 games in his last big-league season. He spent 5 more seasons in the minors before retiring.

Here are the starting eight. All but Azcue, Horton, and Fuller played 135 or more games.

Joe Azcue was the team's regular catcher from 1963-68, and made the all-star team in 1968. Tony Horton was acquired from the Red Sox on June 4th for Gary Bell, and was the regular 1st baseman until personal issues forced him into retirement in August 1970. Topps never issued a card for him. Rookie Vern Fuller took over the 2nd base job from the Pedro Gonzalez/Gus Gil tandem on July 19th, and started most of the remaining games. Larry Brown was the regular shortstop since July 1963, and started 150 games in 1967.

Max Alvis led the team in home runs (21) and RBI (70) in '67. Leon Wagner was a major slugger from 1961-66, but he slipped to 15 homers in 1967, and continued his decline for several more seasons. Vic Davalillo was the primary center fielder, but started less than half of the games there. Chuck Hinton split his time between right and center. He was traded to the Angels after the season for Jose Cardenal.
[Tony Horton photo courtesy http://www.ootpdevelopments.com]


The bench players, in order of plate appearances:

Lee Maye got into 115 games, primarily sharing right field with Hinton, but also pinch-hitting and backing up the other 2 outfield spots. Lefthanded Duke Sims platooned at catcher, starting 77 games to Azcue's 80. Fred Whitfield had been the regular 1st baseman since 1963, but was relegated to pinch-hitting after Horton's arrival. Utilityman Chico Salmon played a lot of shortstop in 1966, but reverted to handyman in '67.

Rocky Colavito hit 358 homers from 1956-66 (including 30 in 1966), but his power vanished in 1967. He was traded to the White Sox in late July for Jim King. Pedro Gonzalez was the regular 2nd baseman since May 1965, but lost his job to Gus Gil to start the season. He got it back in May, only to lose it to Fuller a month later. This was his last big-league season. Don Demeter came over in the Bell-Horton deal, and spent the final months of his 11-year career as the backup center fielder. Rookie Gus Gil was given a shot at the 2nd base job, but was back in the minors by mid-July. He would resurface with the Pilots in 1969.

Richie Scheinblum got an 18-game call-up in September, but wouldn't play regularly until 1969. Jose Vidal spent most of 1965-69 with Cleveland's triple-A team, but played a few games with the Indians in May and September this season. Willie Smith was acquired from the Angels, spent most of the season in triple-A, and was sent to the Cubs in early 1968. Jim King's 3rd stop in his last season (1967) was Cleveland. The Indians used him as a pinch-hitter following his late-July arrival.

OTHER PITCHERS: In late July, veteran Stan Williams returned from 2 seasons in the minors and pitched in 16 games (starting 8). Gary Bell, a fixture on the Tribe's staff since 1958, was traded to the Red Sox in June and made a trip to the World Series. Bob Tiefenauer (who last pitched in the majors in 1965) made 5 appearances in a September call-up. Dick Radatz was the team's closer in 1966, but was traded to the Cubs in late April.

OTHERS: After 2 good seasons (1963-64) as a starter, followed by 2 off-years, Jack Kralick was sold to the Mets on May 1st 1967, but never pitched again. Tom Kelley pitched out of the Indians' bullpen in 1966, but would play only one game in 1967 (9/21). He didn't return to the majors until 1971, with the Braves. Future all-star Ray Fosse had a 7-game cup of coffee in September. Joe Adcock retired as a player after the 1966 season. He managed the 1967 Indians to an 8th-place finish, having no prior (or later) managing experience.

Also appearing for the Indians in 1967 were relief pitchers Steve Bailey (32 games) and Ed Connolly (15 games).

Bill Davis didn't play for the Indians in 1967, but that didn't stop Topps from putting him on a Rookie Stars card 5 times in the 1960s.

The Indians (and Orioles) got two multi-player cards in the 1967 set, while 9 other teams didn't have any.

11/29/67 - Traded Chuck Hinton to the Angels for outfielder Jose Cardenal.

Here's another of the 13 multi-player cards in the 1967 set. I think this was one of the last cards I got in 1967, as before the year was out, I completed the first 6 series (a/k/a low numbers), except for the Cardinals Team card.

I began collecting baseball cards in May 1967, and by that time the 3rd series was probably in the stores, so I had to trade with friends and otherwise scramble to complete the first 2 series.


Lou Brock and Curt Flood were 2/3 of the Cardinals' outfield during the mid-to-late 1960s. In 1967, they would be joined by Roger Maris, as the Cardinals made 2 consecutive World Series appearances (winning in 1967). 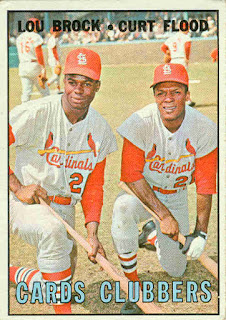 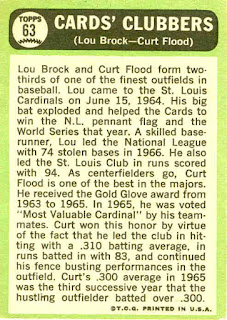 Lou Brock came to the Cardinals in June 1964, and played through the 1979 season. He was the teams' starting left fielder during that entire time, except for the first 23 games of the 1966 season, when he moved to right field as the Cards tried out the newly-acquired Alex Johnson in left.

Both Brock and Flood finished with a .293 career batting average.

Posted by Jim from Downingtown at 12:10 AM No comments: