John O'Donoghue is the oldest living player from the 1966-70 era that I have not blogged about yet.

I think of him as a Cleveland Indian, but he played more games for the Pilots/Brewers and Athletics than he did with the Tribe. After 2 seasons as a front-line starter with Kansas City, he became a supporting player for the remainder of his career.

O’Donoghue was a starter for the Athletics for the next 2 seasons. In 1964 he won 10 games as a 24-year-old rookie, and was the youngest of the 3 primary starters (after Orlando Pena and Diego Segui) on the staff. (In 1965, 19-year-old rookie Catfish Hunter claimed that title.)

Meanwhile, in '65 John led the AL with 18 losses. He did have 9 wins, which was 1 less than the leader for this bad Kansas City team. He also made the All-Star team, despite his eventual 9-18 record. 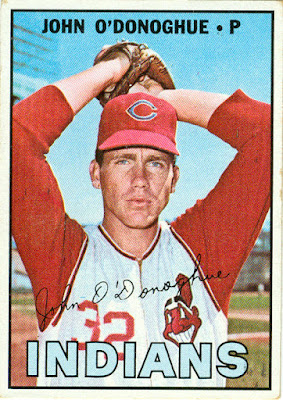 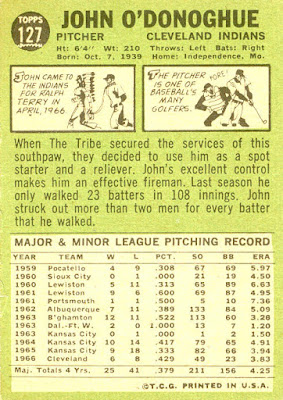 John got a reprieve in 1966 as he was traded to the Indians in early-April for pitcher Ralph Terry. During his 2 seasons with the Indians he was the infrequently-used #5 starter, behind a strong rotation of Sam McDowell, Sonny Siebert, Steve Hargan, and Gary Bell / Luis Tiant.

After the 1967 season he moved on to the Orioles, in exchange for knuckle-baller Eddie Fisher. After leaving the Indians, John was used almost exclusively in relief for the remainder of his career.

He played for triple-A Rochester in August 1968 and April 1969, then was traded to the expansion Pilots in late-April, where he joined his old teammates Segui, Bell, and Fred Talbot in Seattle. John appeared in 55 games for the Pilots, and another 25 games for the Brewers in 1970, before his mid-June trade to the Expos.

He split the 2nd half of the 1970 season between Montreal and their AAA team. After 13 appearances in 1971, the Expos released him at the end of June, ending his 9-year career.

His son (also named John) pitched for the Orioles in 1993.
Posted by Jim from Downingtown at 4:50 PM