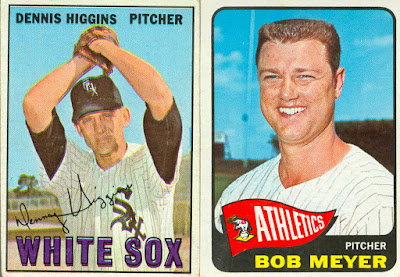 Bob Meyer played in the minors from 1960-69, and made his major-league debut in 1964, playing for the Yankees, Angels, and Athletics (busy guy!) He returned to the minors for 4 1/2 years beginning in 1965, until pitching 6 games (5 starts) for the expansion Seattle Pilots team in the final weeks of the 1969 season. He played all of 1970 with the Brewers (his only full season in the majors).
Posted by Jim from Downingtown at 10:12 PM No comments:

Going Outside the Lines

I found these 2 cards at my friendly neighborhood antique store/card store a few weeks ago. I normally don't have an interest in off-center cards, but these were so bad that I thought it would be fun to find out who was on the neighboring cards. 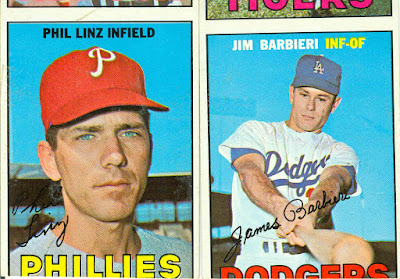 I have previously posted Phil Linz' 1968 card and Jim Barbieri's 1967 card. (Jim was one of the few players to have played in the Little League World Series AND the MLB World Series.)

I also previously posted about these cards.
Posted by Jim from Downingtown at 7:51 PM No comments:

Here is Tigers’ 3rd baseman Don Wert. The back of the card tells us that Don was voted “Tiger of the Year” in 1965. Hmm… this, on a team that included Al Kaline, Norm Cash, Denny McLain, Mickey Lolich, and Bill Freehan. Looks like he's practicing on the Detroit School District's baseball field (or maybe it's at Spring Training in Lakeland, FL).

The Tigers signed Wert in 1958, and he played in their farm system for 5+ seasons. He was called up to the Tigers in mid-May 1963 and soon started 20 consecutive games, replacing incumbent Bubba Phillips (maybe Phillips was injured?) After May, Wert settled into the backup 3rd baseman role (behind Phillips), only starting 25 more games there over the rest of the season. 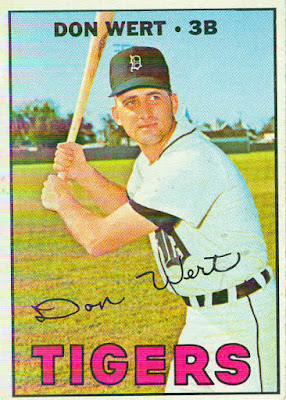 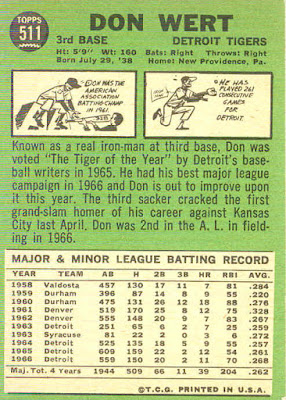 After the 1970 season, Don was traded to the Senators along with pitcher Denny McLain and outfielder Elliot Maddox in exchange for shortstop Ed Brinkman, 3rd baseman Aurelio Rodriguez, and pitchers Joe Coleman and Jim Hannan.

Unfortunately for Wert, the Nats already had Dave Nelson er, Dave Nelson at their hot corner, with Joe Foy and Bernie Allen in reserve. Don made only 7 starts (2 at 3B, 5 at SS) then was given his walking papers in late-June, having only played 20 games thus far.
Posted by Jim from Downingtown at 7:00 AM No comments: