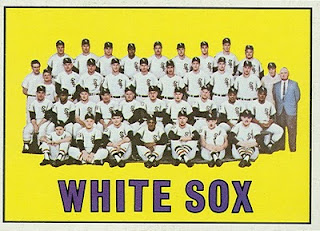 Here are the starting pitchers, in order of starts and innings pitched. Gary Peters was 16-11 with 215 strikeouts, while Joel Horlen was 19-7 with a 2.06 ERA. Tommy John chipped in with 10 wins, while Bruce Howard started 17 of his 30 games, but fashioned a poor 3-10 record.

Here are the 5th starters and long relief men. Surprisingly, the opening day starter was John Buzhardt, but by the end of April, he was out of the loop, replaced by Jim O'Toole, who lasted in the rotation until the beginning of July. After that, Fred Klages and Wilbur Wood took their turns as the 5th starter. Cisco Carlos joined the rotation in late August and took a regular turn for the rest of the season.

Bob Locker appeared only in relief, and led the staff with 77 games. Wilbur Wood came over from the Pirates in the off-season and was used primarily in relief in 1967. (Wood and O'Toole were the only lefties in the bullpen.) Don McMahon was acquired from Boston on June 2nd for Jerry Adair. He pitched 91 innings in 52 games while compiling a 5-0 record. 44-year-old knuckleballer Hoyt Wilhelm compiled a 1.31 ERA in 89 innings of work.

Others haunting the pitching staff: Dennis Higgins made 9 relief appearances for a total of 12 innings. Rookie Roger Nelson relieved in 5 games, but spent most of the season in triple-A. Jack Lamabe made 3 relief appearances, and was shipped out to the Mets in late April. He later hooked on with the Cardinals and appeared in the World Series. Aurelio Monteagudo was signed on July 15th, made 1 start, and was promptly released on July 22nd.

The White Sox' regular lineup was a collection of mix-and-match players at multiple positions. The only players starting more than 80 games at any one position were Ron Hansen (151 at SS), Tommie Agee (124 in CF), Tom McCraw (112 at 1B), and Don Buford (94 at 3B).

Although rookie Duane Josephson started 16 fewer games at catcher than J.C. Martin, he missed a month in mid-season, so it's safe to assume that he was the #1 catcher. McCraw started most of the games at 1B, except for 2 stretches in late July and late August. Although Jerry Adair started the first 15 games at 2B, Wayne Causey soon replaced him as the regular, with occasional starts by Buford at 2B. Hansen's card designates him as "Infield", but he started 151 games in 1967 (all at shortstop) and played no other position.

Switch-hitting Don Buford started 94 games at third base, and another 39 at 2nd base. Although Pete Ward was the Sox' regular 3rd baseman from 1963-65, he spent 1967 as the primary left fielder (71 starts) and backup 1st baseman. In 1966, Agee was the AL rookie of the year, an all-star, and won a gold glove. He followed that up with another all-star appearance in 1967, but was traded to the Mets following the season. Ken Berry started 125 games in the outfield, primarily in right field.

The White Sox carried 4 catchers, although Smoky Burgess was only used as a pinch-hitter. J.C. Martin caught in 96 games, but only 69 as the starter. Jerry McNertney saw a lot of action as the 3rd string catcher. Ken Boyer was acquired from the Mets on July 22nd, and started 32 games at 3B as well as seeing action at 1B.

Walt Williams played in more games (104) than any of the other non-regulars. He was primarily used as a backup left fielder and pinch-hitter. Ed Stroud began the season with the Sox, then was traded to the Senators on June 15th for Jim King. King was sent to the Indians on July 29th for Rocky Colavito.

Other assorted subs: Jerry Adair began the season as the starting 2B, but was traded to the Red Sox for Don McMahon. Dick Kenworthy was a backup 3rd baseman for the White Sox in 1967 and 1968, and according to Baseball-Reference.com, was never in the Mets' organization. Al Weis played less than in any of his previous 4 full seasons with the White Sox, and was traded to the Mets in the off-season.

Bill Voss and Buddy Bradford each appeared in less than 25 games. They shared a rookie card in the 1968 Topps set. Utility man Jimmy Stewart was purchased from the Cubs on May 22nd. (The next day, they returned the favor by selling Lee Elia to the Cubs.) Sandy Alomar joined the Sox on August 15th, as part of the earlier trade for Ken Boyer. SS Rich Morales played in 8 games, but wouldn't become a contributor until 1969.

William "Moose" Skowron Jr was shipped out to the Angels on May 6th, after just 8 pinch-hitting appearances. Future starting catcher Ed Herrmann made his debut on September 1st. Ward and Buford were the team's power hitters (a relative term in Chicago). Eddie Stanky was in the middle of his 3-year stint as the Sox' manager. (He also managed the Cardinals from 1952-55.)

Don Dennis and Jim Hicks spent 1967 at triple-A Indianapolis (as did Elia, until he was sold to the Cubs on May 23rd, who assigned him to AAA Tacoma.)

Finally, the rookie cards. Marv Staehle spent most of 1967 in AAA but appeared in 32 games for the White Sox as a backup 2B-SS. Lou Piniella was never on the White Sox, but in the late 1960s if you had 3 rookie cards in your hand, chances are one of them had Piniella on it!

7/29/67 - Traded Jim King and a player to be named to Cleveland for Rocky Colavito.

8/15/67 - Acquired Sandy Alomar from the Mets as part of the Ken Boyer trade.

I've caught the poll bug after reading and voting for White Sox Cards' Hall of Fame. I've added polls to several of my baseball and football card blogs. You can use this post to comment on the selections, or to offer up other choices.