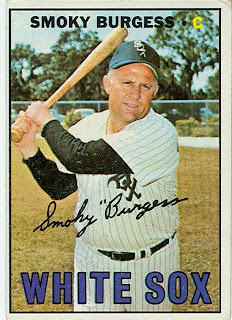 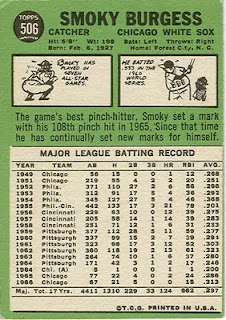 Smoky started pro baseball in the Cubs farm system in 1944. He made several stops (including the PCL Los Angeles Angels) before making the Cubs team in 1949. In October 1951 he was traded to the Reds, and within 2 months was traded to the Phillies for (among others) catcher Andy Seminick. In early 1955 the Phillies traded him back to the Reds for (among others) Andy Seminick!

Before the 1959 season he was traded (along with 3B Don Hoak) to the Pirates for Andy Seminick OF Frank Thomas and others. Burgess played for the Pirates in the 1960 World Series.

The White Sox claimed him from the Pirates in September 1964. As I mentioned at the top, the White Sox used him almost exclusively as a pinch-hitter, not as a catcher. He was released after the 1966 season, re-signed before the 1967 season, and released again after the season.

Smoky is one of only 3 players with 1967 cards to have his MLB debut in the 1940s (along with Curt Simmons and Joe Nuxhall, although Nuxhall retired prior to the 1967 season).