Here's another of the 13 multi-player cards issued by Topps in the 1967 set. For some reason, 9 teams didn't get one of these cards (Red Sox, Yankees, Senators, Athletics, Angels, Cubs, Reds, Astros, Dodgers), while 2 teams (Orioles, Indians) got 2 such cards.

Johnny Callison and Richie Allen were the Phillies' top two sluggers in the mid-1960s. 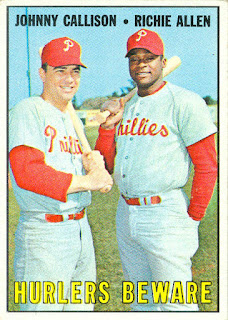 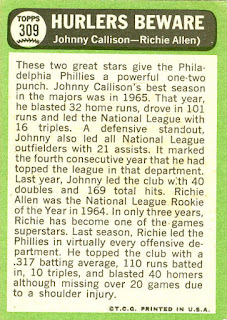 Right-handed Allen won the NL Rookie of the Year award in 1964, and was the team's top slugger for 6 seasons, before being traded to the Cardinals after the 1969 season. He had some monster years for the White Sox in the early 1970s, before returning to the Phillies for the '75 and '76 seasons.

The Phillies also had a multi-player card in the 1966 set, titled "Power Plus" and featuring Callison and Wes Covington. (no Allen?)

Posted by Jim from Downingtown at 10:21 PM 4 comments:

Here's a card featuring the entire Cubs' team. Oddly, in a few years, Topps would issue the Cubs Team with a series of floating heads instead of a group picture. (All other teams would get the traditional group picture.) 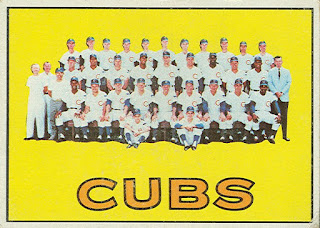 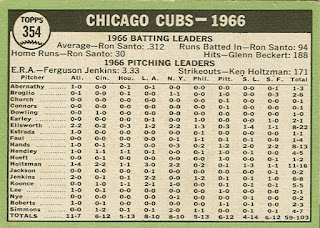 The Cubs finished in last place in 1966, losing 103 games. (That tends to inflate the number of pitchers used.) The big loser was Dick Ellsworth at 8-22. What to do with him? Ship him to the Phillies! After all, they just took Bob Buhl and Larry Jackson off your hands.

Twelve of these pitchers wouldn't be back for the 1967 season, including veteran Robin Roberts, who ended his career going 2-3 for the Cubs. 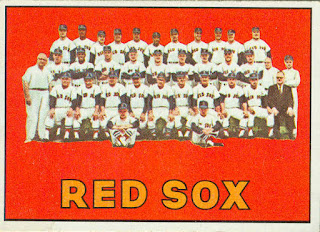 The Boston Red Sox jumped from 9th place in 1966 to 1st place in 1967, powered by Carl Yastrzemski's triple-crown performance, Jim Lonborg's 22-9 pitching record, and to some extent, the collapse of the defending champion Baltimore Orioles' pitching staff.

The Sox started the season with a rotation of Jim Lonborg, rookie Billy Rohr, Darrell Brandon, and Dennis Bennett, with Hank Fischer getting the odd spot start. By the end of the season, that would change to Lonborg, Jose Santiago, Gary Bell, and Lee Stange.

Jim Lonborg led the team with a 22-9 record in 39 starts, including 15 complete games and 246 strikeouts. He was 2-1 in 3 World Series starts. Lee Stange went 8-10 in 24 starts and 11 relief appearances. He was with the team for the entire season, but didn't join the rotation until early June. Gary Bell won 12 and lost 8 after his June 4th acquisition from Cleveland. Dennis Bennett was 4-3 in 11 starts before he was shipped out to the Mets in late June.

John Wyatt fashioned a 10-7 record as the team's bullpen ace, pitching in 60 games (all in relief). Darrell Brandon made 19 starts through early August, then was relegated to the bullpen for the rest of the season. Jose Santiago spent most of the season in the bullpen, although he made 5 consecutive starts in May, and returned to a starting role in late August. He also started 2 World Series games. Dan Osinski made 34 appearances, all in relief.

Sparky Lyle made his major-league debut on July 4th, the first of 27 relief outings. Dave Morehead spent most of the season in the minors, then appeared in 10 games (9 starts) beginning on August 1st. Gary Waslewski made his major-league debut on June 11th, and made 8 starts in June and July.  He returned to the team in late September in a relief role. After 2 seasons as a key member of Boston's staff, Jerry Stephenson only appeared in 8 games in 1967, all in  late August and September.

Other assorted pitchers: Hank Fischer pitched in 7 games in April and May. His only other action was both ends of an August 8th doubleheader. Bill Landis pitched 18 games for the Red Sox in 1967, with very few appearances in mid-season. Galen Cisco spent much of the season in the minors, but played 11 games between late April and mid-July. On June 2nd (one year to the day he was acquired from the Indians) Don McMahon was traded to the White Sox for Jerry Adair.

Here are the starting 8 for the Sox. After the season, Mike Ryan would be traded to the Phillies. George Scott was fresh off his Topps all-rookie season in 1966, and hit 19 homers in 1967. Rookie Mike Andrews won the 2nd base job, but slipped into a job-share with Jerry Adair in late September (and the post-season). Rico Petrocelli and Joe Foy held down the left side of the infield.

The outfield was manned by triple-crown winner Carl Yastrzemski, rookie Reggie Smith, and slugger Tony Conigliaro. Tony was beaned in late August, and missed the remainder of the season, and all of 1968.

These are the bench players, in order of playing time.  Jerry Adair was acquired in early June, and filled in for Petrocelli at shortstop for most of July, and replaced Foy at 3rd base for most of August and September. Lefty Jose Tartabull started 18 games in center and 29 games in right, many coming just after Conigliaro was beaned. Dalton Jones was the primary infield reserve. Rookie catcher Russ Gibson started 37 games, and would share the starting job in 1968 with long-time Yankee Elston Howard, who was acquired on August 3rd.

George Thomas was the 5th outfielder, playing mostly on the corners. Ken Harrelson was signed in late August (after his release by Kansas City) to replace Conigliaro in right field. Bob Tillman began the season as the team's backup catcher, but with the emergence of Gibson and the acquisition of Howard, Tillman was expendable, and was shipped to the Yankees days after Howard's arrival.

Veteran Norm Siebern was picked up on July  15th, and provided lefthanded pinch-hitting. Don Demeter and 1st baseman Tony Horton were traded to the Indians in early June for pitcher Gary Bell.
[Tony Horton photo courtesy of http://www.ootpdevelopments.com] Jim Landis was signed in mid-August to replace Conigliaro, but was released a week later.

Ken Brett made his big-league debut on September 27th. Speaking of debuts, this was Dick Williams' first major-league managerial job, and he went all the way to the World Series. Garry Roggenburk and George Smith did not play for the Red Sox in 1967.

Topps hit the jackpot with the first Red Sox rookies card - both players were everyday players in their rookie season. Billy Rohr began the season in the starting rotation, but returned to the minors in early June.

10/13/66 - Traded pitcher Bill Monbouquette to the Tigers for George Smith and George Thomas.

12/15/66 - Traded pitchers Dick Stigman and Rollie Sheldon to the Reds for Hank Fischer.

08/03/67 - Traded pitcher Ron Klimkowski to the Yankees for Elston Howard.

12/15/67 - Traded Mike Ryan to the Phillies for Dick Ellsworth and Gene Oliver.

Posted by Jim from Downingtown at 9:11 PM No comments: