Carl Yastrzemski made his major-league debut on opening day 1961, and started 146 games in left field that season. He replaced Ted Williams, who had retired after the 1960 season. (Williams had been Boston's leftfielder since 1939, except for the seasons he missed for military service.) 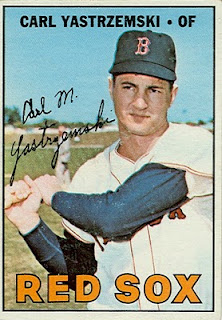 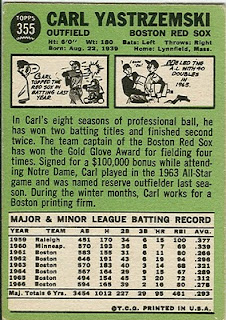 The popular notion is that the Red Sox only had 3 regular leftfielders from 1939 to 1987 (Williams, Yastrzemski, and Jim Rice). Actually, there were several breaks in that string. In 1964, rookie Tony Conigliaro was the regular leftfielder, while Yaz played centerfield all season.
There was also a blip from 1972 to 1974: Yaz started only 83 of his 125 games in leftfield in 1972. The following season, he was the regular first baseman, and played more games at THIRD base (33) than in left field (15). Tommy Harper was the regular leftfielder that year. In 1974, Yaz and Harper each played about half the games at 1B and LF.
In 1975, Rice took over in left, but was limited to fulltime DH duties in 1977, so Yaz was back out in left for one more season.

Yastrzemski played for 23 years (all with the Red Sox), retiring after the 1983 season. He was a regular to the end. He never had less than 535 plate appearances in a season until his final four seasons, and even then he had over 390 plate appearances per season - a real workhorse!
Posted by Jim from Downingtown at 9:41:00 PM