Since 1967 high-number cards weren't sold in my area, I had never heard of Jim Owens until well into the 1980s, when I finally got this card.

Jim Owens (#582) began pro ball in 1951 at age 17 in the Phillies' farm system, starting with Bradford (PA) in the class-D Pennsylvania-Ontario-New York league. The next year, he pitched for the Miami (Oklahoma) Eagles in the class-D Kansas-Oklahoma-Missouri league. In 1953, he pitched for the Terre Haute Phillies in the class-B Illinois-Indiana-Iowa league (also referred to as the Three-I, or sometimes Three-Eye league). One benefit from researching these players while blogging is discovering all the outposts that had minor-league baseball back in the 1950s. This is the first card I remember having "Terre Haute" listed! 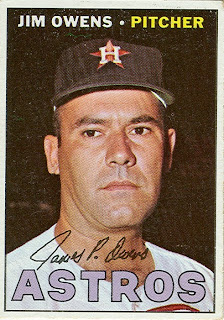 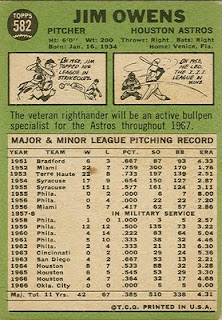 After 3 more seasons at triple-A, Owens made the Phillies to stay, but missed the 1957 season for military service. (It seems odd that Owens would be in military service in 1957. For all the other players that I've encountered who have missed time in the 1950s, it's always been in the 1951-1954 Korean War period.)

Owens was traded to the Reds following the 1962 season for second baseman Cookie Rojas. He played only one season with Cincinnati, splitting time with their triple-A team, and was a rule 5 draft pick by the Astros following the 1963 season.

My Dad, Dean Willoughby grew up and was/is good friends with Jim and his brother Tom. My Dad's brother Bob used to make his kids remove their Pittsburg Pirates penants, posters etc from their bedroom walls and replace them with yellow Houston Astros penants, etc when Jim would come to visit them in Bradford PA. Jim and his brother Tom are highly regarded in our family. If you would like more history on Jim, I could put you in touch with my father.

I had the privilege of working with Jim long after his retirement. He would regale us with wonderful stories of Pete Rose, Larry Dierker, Doug Rader and others of the era. Of course, Jim Bowden’s Ball Four book spoke of Jim’s baseball antics and tremendous sense of humor. While a Pennsylvania boy at heart, Jim made Houston his home and loves the area. He is wonderful soul and an awesome friend.