Bressoud was the backup shortstop in '56 and '57, and the backup 2nd baseman in '58. In 1959, Ed took over the starting shortstop role, starting 90 games (to Andre Rodgers' 64 starts). The next year, Bressoud's playing time increased as Rodgers' decreased. 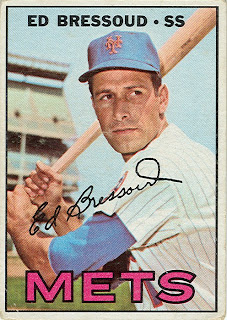 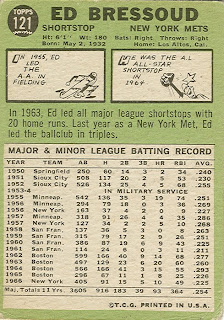 In 1961, Bressoud's playing time drastically decreased, as youngster Jose Pagan took over the shortstop position. (Pagan would remain a fixture at short from 1961 to 1964.) After the 1961 season, Bressoud was selected by the Houston Colt .45s in the expansion draft, but a month later was traded to the Red Sox.

Prior to the 1966 season, the Red Sox traded him to the Mets for outfielder Joe Christopher. Bressoud would split the shortstop duties with fellow old-timer Roy McMillan that year. In late August, rookie Bud Harrelson was called up, and would start nearly every September game at shortstop, signaling the end of the line for both Bressoud and McMillan.

Ten days before the 1967 season, Bressoud and outfielder Dan Napolean were traded to the Cardinals for 2nd baseman Jerry Buchek, pitcher Art Mahaffey, and infielder Tony Martinez. Bressoud would appear in 50 games for the Cardinals, mostly as the backup shortstop. He played in 2 World Series games, but had no at-bats.
Posted by Jim from Downingtown at 10:37:00 PM