This is the final card for Dennis Bennett (#206), although he would play 1 more season in the majors. (Bennett played minor-league ball into 1973.)

In 1962, Bennett was the Phillies' #3 starter behind Art Mahaffey and Jack Hamilton. The following season, he dropped to #5, but his final season in Philly (1964) saw him regain the #3 spot, this time behind Jim Bunning and Chris Short. 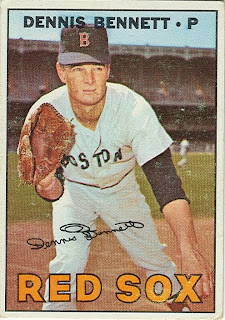 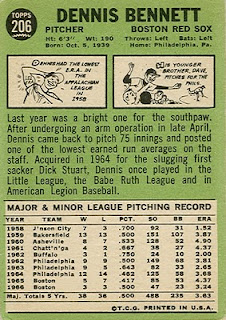 After the 1964 season, Dennis was traded to the Red Sox for 1st baseman Dick Stuart (who lasted 1 season with the Phillies). In his 2-plus seasons in Boston, Bennett never rose above #5 starter status, even though he was the only lefthander in the rotation.

Dennis made 13 appearances (11 starts) for the Sox in 1967, before being traded to the Mets in June. He started 6 of his 8 games with the Mets, and also pitched in 6 games for their triple-A team.

Bennett started the 1968 season in the minors. After 2 games with the Mets' Jacksonville team, he was sold to the Cubs in May. Dennis never got to play for the Cubs. Rather, he made 19 starts for their triple-A team, before the Cubs sold him to the Angels on July 29th. The good news is that he was back in the majors, pitching 16 games for the Angels. The bad news is that those would be his last major-league games.


Whenever the subject of Dennis Bennett comes up, I always think of his brother Dave (who was also a Phillies' pitching prospect in the mid 1960s) and his 1964 card, which contains an amusing goof on the back: 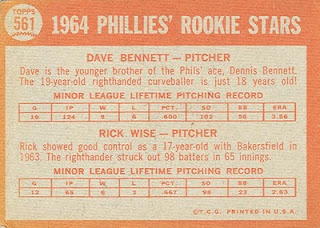 Posted by Jim from Downingtown at 11:40 PM