Here is one of the rare high-number cards, showing utilityman Al Weis in his final season with the White Sox.

Weis was signed by the ChiSox in 1959, and played in the minors for 4 seasons before making his major-league debut with 7 games in September 1962. 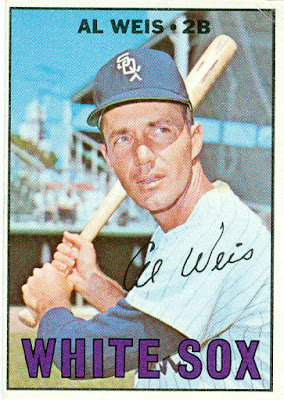 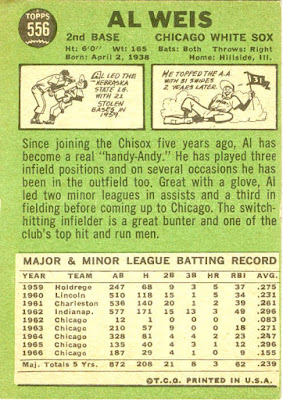 Al played 99 games in his rookie season of 1963, and although he only started 53 games between 2B and SS (well behind regulars Nellie Fox and Ron Hansen), somehow Topps selected him to their All-Rookie team that season, displaying the trophy on his 1964 card.

In 1964 Fox had moved on, and Weis shared the 2nd base duties with rookie Don Buford (both were switch-hitters).

Al backed up Buford during the 1965 season, but with Don mostly playing 3rd base in 1966, Weis had increased playing time, sharing the 2nd base job with Jerry Adair, Wayne Causey, and Buford. In 1967 it was back to the bench, as Weis played only 50 games (14 starts).

After the season, he was traded to the Mets with outfielder Tommie Agee for outfielder Tommy Davis and pitcher Jack Fisher. Al played for the Mets for 3 1/2 seasons, with most of his playing time coming in ’68 and ’69. He played in all 3 games in the 1969 NLCS, and all 5 games of the ’69 World Series. Although he hit .215 with only 23 RBI that season, in the World Series he hit .455 with 1 home run and 3 RBI, while starting 4 of the 5 games for the Amazin’ Mets.