It's been over 2 years since my last team review. Let's get to it... 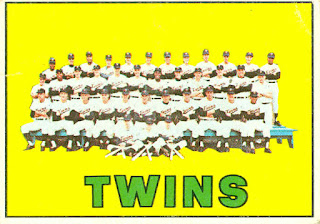 The Minnesota Twins finished 1967 at 91-71, in a 2nd-place tie with the Detroit Tigers, 1 game behind the Boston Red Sox. The Twins were in 1st place as late as 9/26, but lost their final 3 games of the season.

The Twins began the season with a starting rotation of Jim Kaat, Dean Chance, Dave Boswell, and Mudcat Grant, with Jim Ollom getting the occasional spot start. By late May, the team switched to a 5-man rotation, with Jim Merritt in and Ollom out. In mid-season, it seems that Jim Perry alternated with Grant in the #5 slot.

In the season's final week, manager Sam Mele took a page out of 1964 Phillies' manager Gene Mauch's playbook and started only Kaat and Chance for the final week of the season (with the same disastrous results as the '64 Phillies).

Here are the starting pitchers, in order of innings pitched. Although everyone on the staff appeared in relief at one time or another, the 4 above were primarily starting pitchers. Chance won 20 games in his first season with the Twins.

Mudcat Grant started half of his games, while Jim Perry started about one-third of his appearances. Veterans Al Worthington and Ron Kline pitched only in relief, with Worthington collecting 16 saves.

Jim Roland and Jim Ollom were the 2 left-handers in the bullpen. After 2 seasons with the Twins, Roland spent all of 1965-66 in the minors but returned in 1967. Ollom had played 3 games the previous season, but was with the Twins for all of 1967, his final big-league season. These first 10 pitchers were virtually the entire staff. Dwight Siebler pitched 3 innings in April (his final big-league action), while Mel Nelson pitched in 1 game in September.

Here are the starting eight. Jerry Zimmerman took over the starting job from veteran Earl Battey. With Don Mincher traded to the Angels for Chance, Harmon Killebrew played almost exclusively at first base in 1967, starting 160 games there and only 3 at the hot corner. He also led the AL with 44 home runs. Rod Carew made his major-league debut on opening day, and was named AL Rookie of the Year. 1965 MVP Zoilo Versalles started 152 games at shortstop, but only hit .200, well below his numbers from 2 years earlier. He was sent packing to the Dodgers in the off-season.

Rich Rollins started 90 games at 3rd base, alternating with Cesar Tovar. 1959 ROY Bob Allison held down the left field post, while crashing 24 home runs. Ted Uhlaender started 2/3 of the games in center field, backed up by Tovar. 1964 ROY Tony Oliva was in the midst of an 8-year string of All-Star appearances, and started 145 games in right field.

Here are the bench players, in order of at-bats. Cesar Tovar saw significant playing time at 2B, 3B, and CF. Russ Nixon started 41 games behind the dish as the #2 catcher. Earl Battey was the Twins' regular catcher for several seasons, but was relegated to 3rd-string in his final season. Rookie Rich Reese was used as a pinch-hitter and defensive replacement for Killebrew at 1st base and Allison in left field.

Sandy Valdespino was the 5th outfielder (behind Tovar). Ron Clark only played in 20 games, mostly as a reserve 3rd baseman. Frank Kostro spent all of '66 and most of '67 in the minors, but played 20 games with the Twins in 1967, almost exclusively as a pinch-hitter. Andy Kosco spent most of the year in AAA, but played 9 games in the season's first 4 weeks.

Infielders Jackie Hernandez and Frank Quilici played mostly in triple-A, each getting less than 30 at-bats with the Twins. Walt Bond played 10 games in his only season with the Twins, the last coming on May 7th. He passed away 4 months later from leukemia. Graig Nettles made his major-league debut with 3 pinch-hitting appearances in September.

Harold "Pat" Kelly also made his big-league debut in September, with 7 pinch-runs and 1 pinch-hitting appearance. Sam Mele was in his 7th season as Twins' manager. With the team in 6th place, he was canned after 50 games. Cal Ermer took over the reins for the remainder of the season, and for all of 1968. Bob Allison and Harmon Killebrew were the Twins' own Bash Brothers.

Also playing for the Twins in 1967 were catcher Hank Izquierdo and outfielder Carroll Hardy.

Here are the rookie cards. Bill Whitby and Hank Allen (obviously) didn't play for the Twins in 1967.

12/03/66 - Traded Bernie Allen and Camilo Pascual to the Senators for Ron Kline.

11/28/67 - Sandy Valdespino drafted by the Braves in the rule 5 draft.
11/28/67 - Traded Mudcat Grant and Zoilo Versalles to the Dodgers for Bob Miller, Ron Perranoski and John Roseboro.