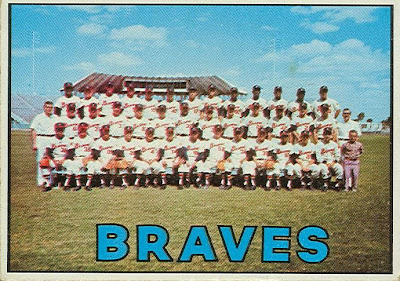 Here is the Braves' team card. It's the only Topps team card prior to 1968 that included the actual background in the photo.


The Braves began the season with a starting rotation of Denver Lemaster, Ken Johnson, Tony Cloninger, Pat Jarvis, and Dick Kelley. This rotation remained somewhat intact through mid-June, although for various stretches, Johnson and Cloninger missed starts and were replaced by Bob Bruce and Wade Blasingame.

By mid-June, Phil Niekro joined the rotation (replacing Kelley), and those 5 carried on through the rest of the summer, the only change being Clay Carroll replacing Cloninger beginning in early August. Ed Rakow got the extra start now and then when doubleheaders cropped up. 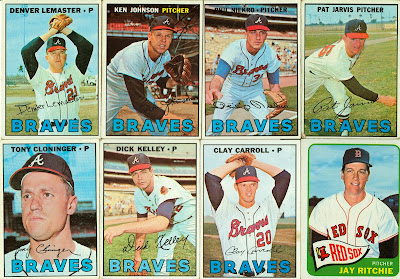 Lemaster led the staff in starts (31) and innings pitched (215) but only managed a 9-9 record. Johnson (the dean at age 34) and Jarvis were the other 2 rotation mainstays, winning 13 and 15 games respectively. The veteran Cloninger missed all of May and only pitched 3 times after July. When he did play, he was ineffective, pitching only 76 innings over 16 starts and compiling a hefty 5.17 ERA.

Niekro began the season as the team’s closer, collecting a team-high 9 saves. He joined the rotation in mid-June and started 20 games the rest of the way, fashioning a 11-9 record, with a 1.87 ERA. Others used primarily in relief were Dick Kelley and Clay Carroll, although Kelly started for the first 2 months, while Carroll started for the last 2 months. 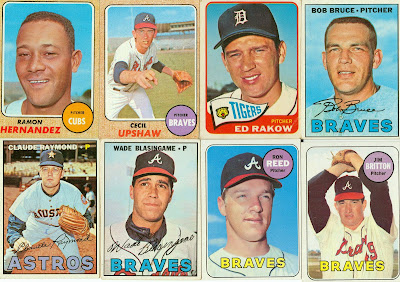 Pitchers used strictly in relief were Jay Ritchie and rookie Ramon Hernandez, a Rule 5 pickup from the Angels. Rookie Cecil Upshaw was called up from triple-A in mid-July, and took Niekro’s old job as the bullpen hammer.

Veteran Ed Rakow (who hadn’t pitched in the majors since 1965) was recalled in mid-July and pitched in 17 games, including 3 spot starts. This was to be his last big-league action. Another guy in his final season was Bob Bruce. The 34-year-old was acquired from the Astros in the off-season for Eddie Mathews, started a few games early-on, and made his last appearance on June 24th. He finished out the season in triple-A.

Wade Blasingame began the season as a reliever and spot starter, then was traded to the Astros on June 15th for Claude Raymond, who had been with the Braves from 1961-63. Raymond relieved in 28 games in the 2nd half. Rookies Ron Reed and Jim Britton made a few appearances in late-September. 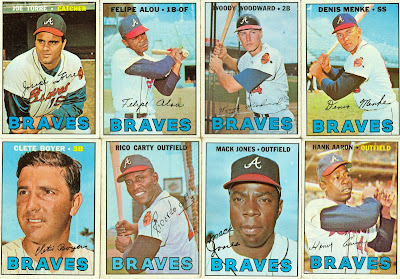 Here are the starting eight. Except for Clete Boyer (acquired in the off-season from the Yankees), this group had been together for a while. Joe Torre started 102 games behind the plate, and another 21 at 1st base. Felipe Alou started 83 games at 1st base and 53 in the outfield. Woody Woodward made 114 starts at 2nd base - almost every game except for mid-April to mid-May, and the final 2 weeks. He also started 15 games at shortstop in late September. Denis Menke was the starting shortstop until mid-September.

Boyer started 148 games at the hot corner in his first NL season. Rico Carty, Mack Jones, and Hank Aaron were the primary outfielders. For some reason, they shuffled it up for a dozen games in mid-August, with Jones in left, Aaron in center, and Carty in right. Everyone but the middle infielders hit 15 or more homers, with Aaron (an NL-best 39), Boyer (26), and Torre (20) leading the way. 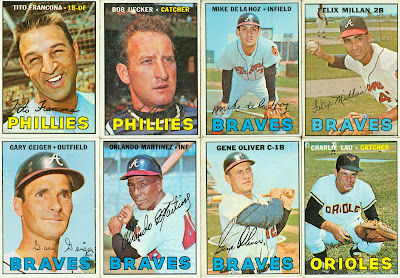 Here are the bench players, in order of playing time. Tito Francona was purchased from the Phillies in mid-June, and was a pinch-hitter and backup first baseman for the rest of the season. He also started long stretches at 1st base while Alou was backfilling in the outfield. Bob Uecker was acquired from the Phillies for Gene Oliver on June 6th. After starting 19 straight games (with Torre out of the lineup), Ueck settled into the role of knuckleballer Niekro's personal catcher for the remainder of his final season.

Also in his final year (save for 1 game in 1969), Mike de la Hoz was used as a pinch-hitter and occasional starter at 3rd base. He was also the backup 2nd baseman for most of the season. Rookie Felix Millan started most of the games at 2nd base from mid-April to mid-May, then was sent down until September. He reclaimed the starting job in the season's final 2 weeks.

Gary Geiger was the team's 5th outfielder (behind Alou) and played mostly in center field. Seeing his first major-league action since 1962, Orlando "Marty" Martinez was the Braves' backup shortstop and emergency catcher. Veteran Gene Oliver was used sparingly by the Braves prior to his 6/6 trade to the Phillies. Charlie Lau was also in his final season. Strictly a pinch-hitter in his last 2 seasons, he was purchased from the Orioles on 5/31. 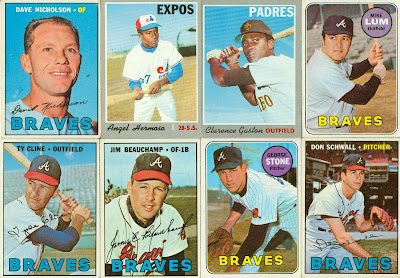 And the cup-of-coffee guys: Dave Nicholson was acquired in the Eddie Mathews trade, and spent the season in the minors. He played 10 games in a September recall. It would be his last big-league action (although he also had a card in the 1969 set). Another September callup was rookie shortstop Remy Hermoso, who would later surface with the 1969 Expos and 1974 Indians. Also given a brief September look-see were outfielders Cito Gaston and Mike Lum. Gaston would not return to the majors until 1969, with the expansion Padres.

Ty Cline played in 10 games (mostly as a pinch-hitter), then was sold to the Giants in late May. Why does Jim Beauchamp have a card? He was in the minors for all of 1966, and only played 4 games with the Braves in early 1967, before returning to the sticks. George Stone pitched a combined 7 innings over 2 games in late September. 1961 AL Rookie of the Year Don Schwall pitched 2/3 of an inning on April 12th for the Braves, then 6 games in the minors in his final pro season. 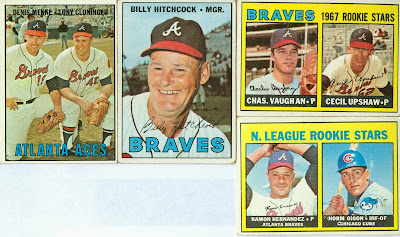 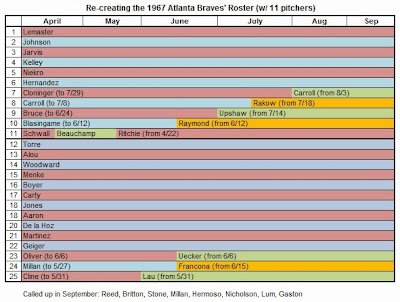 12/07/66 - Traded catcher Chris Cannizzaro and 1B John Herrnstein to the Red Sox for pitchers Julio Navarro and Ed Rakow.

12/31/66 - Traded 3B Eddie Mathews, pitcher Arnold Umbach, and a player to be named (2B Sandy Alomar 2/25) to the Astros for pitcher Bob Bruce and outfielder Dave Nicholson.

06/15/67 - Traded Wade Blasingame to the Astros for Claude Raymond.

10/08/67 - Traded Denny Lemaster and Denis Menke to the Astros for SS Sonny Jackson and 1B Chuck Harrison.

12/07/67 - Traded 3B Bobby Cox to the Yankees for catcher Bob Tillman and pitcher Dale Roberts.