Tony Oliva was a hitting machine who played for 17 seasons – all with the Minnesota Twins. 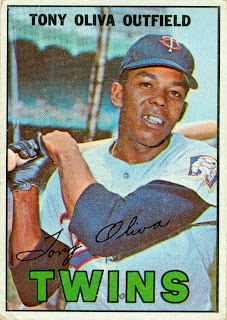 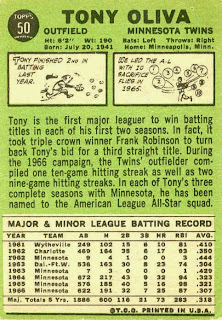 Olivia followed up his rookie season by leading the AL in batting in 1965, this time with a .321 average, while also collecting the most hits (185). He finished 2nd to teammate Zoilo Versalles in the MVP voting. Although he only hit .192 (5-for-26) in the ‘65 World Series vs. the Dodgers, he hit a home run in game 4 off Don Drysdale.

Knee injuries hampered Tony for the remainder of his career. He missed all but 10 games of the 1972 season, and when he returned, it was strictly as a designated hitter. He was the team’s full-time DH from 1973-75, and a part-time player in his final season (1976).

I was surprised to see that his career batting average was only .304 (the effect of his last few seasons under .300).