Here is relief pitcher Ron Perranoski, shown on his last card as an LA Dodger. After the 1967 season, he was traded to the Twins with catcher John Roseboro and pitcher Bob Miller for pitcher Mudcat Grant and shortstop Zoilo Versalles.

(This deal looks like a steal for the Twins. Versalles was the 1965 AL MVP, but was a bust in his one season with the Dodgers. After 1968, he was lost (read: unloaded) to the expansion Padres. Even the Padres didn’t keep him – he was flipped to the Indians for a career minor-leaguer before the ’69 season. Grant only pitched one season for the Dodgers, while the 3 new Twins each had several productive seasons in Minnesota.)


After pitching for Michigan State University (where one of his teammates was Dick Radatz), Ron was signed by the Cubs in 1958. He spent 2 seasons as a starting pitcher in their farm system, then was traded to the Dodgers in April 1960 for infielder Don Zimmer. 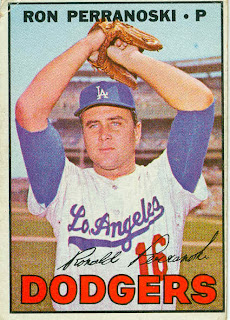 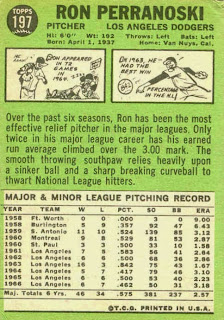 
After his trade to Minnesota, Perranoski continued to perform well. Pitching behind veteran Al Worthington in 1968, he then became the Twins’ closer in ’69 and ’70, leading the team in saves both years. Ron also pitched in the ALCS in 1969 and 1970.

On July 30th, 1971 he was claimed off waivers by the Tigers, and pitched the rest of that season and the 1st half of 1972 in Detroit, before getting his release exactly one year later.

A week later (August 7th) the Dodgers picked him up for the remainder of the 1972 season. Perranoski finished his career by pitching for the Angels in 1973. He was released in October 1973, although he hadn't pitched since mid-June.

Perranoski pitched in 737 games over his 13-year career, all in relief except for 1 game during his rookie season.

Posted by Jim from Downingtown at 8:49 PM