Here is Astros’ starter Dave Giusti. I’ve decided I really like the 1967 Astros cards, probably because what followed in 1968 and 1969 was an abomination of capless headshots and airbrush jobs for all Astros’ players. Giusti had a card every year from 1962-77, and was inflicted with a capless headshot in ’65, ’68, and ’70.

Dave was signed by the upstart Houston Colt .45s in 1961, one year before they began playing in the National League. He split the year between Class A Jacksonville, and the Cubs’ AAA team (which happened to be in Houston that year). 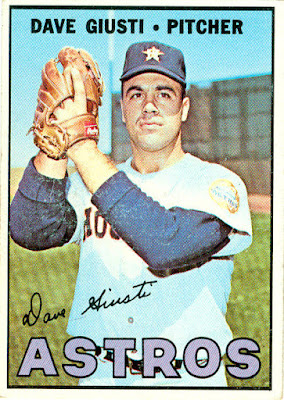 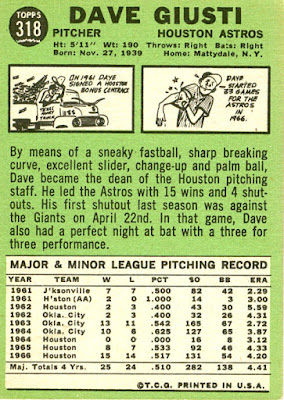 Giusti played 22 games for the Colts during the first half of 1962 (mostly as a reliever), but played most of 1962 to 1964 seasons for Colts’ AAA team in Oklahoma City. He also scattered 8 appearances for Houston in 1964.

Dave made the majors permanently in 1965, the year the team was renamed to ‘Astros’. He made 38 appearances (including 13 starts) that season.

After the 1968 season (and with the emergence of pitchers Don Wilson and Larry Dierker), the Astros traded away 2 of their top 3 starting pitchers from the past few seasons, with Mike Cuellar going to the Orioles and Giusti going to the Cardinals.

The day after the 1968 World Series ended, the Astros traded Giusti to the Cardinals for catcher Johnny Edwards. Three days later, an unprotected Giusti was selected by the Padres in the expansion draft. Six weeks later, the Padres traded him back to the Cardinals for 4 players. (Hey, I sense a player-stashing violation here! Why would the Cards have exposed a starting pitcher for which they just traded a quality catcher?)

After an awful (3-7) season with the Cards in 1969, Dave was shipped off to the Pirates (with backup catcher Dave Ricketts) for backup catcher Carl Taylor. Giusti found new life in Pittsburgh, becoming a key player in their bullpen for the next 7 seasons. He pitched in the post-season in 5 of those 7 years, and made the All-Star team in 1973.

In March 1977, Dave was part of a 9-player trade with the Athletics which saw Doc Medich, Tony Armas, and others accompany him to Oakland in exchange for infielders Tommy Helms and Phil Garner. Giusti made 40 relief appearances for the Athletics, and after his August 5th acquisition by the Cubs, another 20 games with Chicago. He was released after the season, ending his 15-year career.