This the final card for Chuck Estrada (#537). Because this was a rare high-number card, and he had no card after this year, Estrada was one of several players I knew nothing about (for the same reasons) until getting their 1967 cards many years later; (players such as Joe Adcock, Jack Sanford, Johnny Klippstein, Doug Camilli, Andre Rogers, Don Demeter, Dick Egan, Bob Duliba, and Jim Owens). 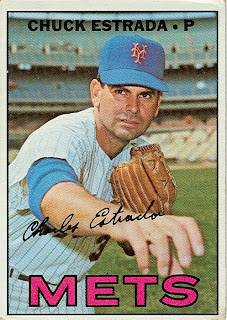 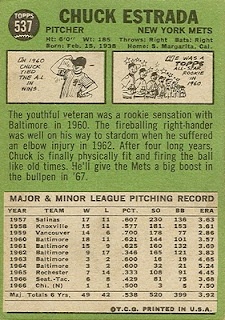 Baltimore had many good, young starting pitchers come up in the 1960s. Unfortunately, it seems that most of them also experienced arm trouble early, with only McNally and Palmer ever fully recovering.
Posted by Jim from Downingtown at 10:51 PM